So, so far I've had the daughter of the first owner on this thread and a video of a previous owner


So, I've drifted off for a while, needed to stay away from the car. Got very depressed with it.
I shouldn't really as I know I've done some cracking work on it and I've accomplished fantastic things with this car. Apart from the body panels the car is in near immaculate condition now.

So before Christmas, I raised the rear end up by one notch, so hopefully i can get it off my drive.

The engine will still not run (Wish I'd never messed with the timing now). I'm great with everything else, just not engines.
This is the only thing holding me off now from really enjoying it.

If anyone is local to me (Mansfield) and wants to earn a few quid to help me set up the engine, then I'd be over joyed. For the moment it will sit on the garage waiting for the weather to warm up a bit. I might then give it another go.
1971 VW Type 3 1600 TE Fastback. Body off Resto completed, now just bits and pieces and niff naff to do.
Volksworld Magazine featured car 2013
Instagram: @type3.fastback
Top

Aaronslimvw wrote: ↑
11th August 2018 - 12:41pm
Awesome work mate!! I’m having similar issues with the car not going low enough too.. going to get some lower shock re-locators and modify them so they are 2-3” lower to get the beam on the floor. What are you doing as far as steering goes? Flipped track rods? Quick steer?

It's got flipped track rods (needs a bump steer adaptor), not used the quick steer adapter, but I have fabricated a steering stop, which stops the wheels from rubbing the inner arch. Think I've documented it on this thread somewhere.
1971 VW Type 3 1600 TE Fastback. Body off Resto completed, now just bits and pieces and niff naff to do.
Volksworld Magazine featured car 2013
Instagram: @type3.fastback
Top

Now then, im localish ( an hour away) depending when in mansfield you are. If you can wait a month then ill be able to get over and lend a hand. Though your running FI and I have no experience with that at all. So Ive dont know if ill be any use.
The sultan of swing
Top

broady_6 wrote: ↑
28th January 2019 - 7:47pm
Now then, im localish ( an hour away) depending when in mansfield you are. If you can wait a month then ill be able to get over and lend a hand. Though your running FI and I have no experience with that at all. So Ive dont know if ill be any use.

That's very much appreciated. I'm near Kingsmill hospital if that's any use to you. I've been waiting about 10 months another couple more won't make much difference.
Yes, it's running FI, but the problems have only since arisen since messing about with the dizzy and timing. So I think I need someone who knows these engines (Air cooled) who can set them up properly, i/e TDC, points, timing etc etc.
Happy to pay for your time and fuel.
1971 VW Type 3 1600 TE Fastback. Body off Resto completed, now just bits and pieces and niff naff to do.
Volksworld Magazine featured car 2013
Instagram: @type3.fastback
Top

I will be in touch! Couple of big things going on which are all due to be over by the 22nd next month. Ill keep you posted

Ok so im stealing the glory! Sorted the running issues out. It was the plug on the side of the distributor. The security was iffy and as muddy had previously adjusted the timing it had dislodged the plug. Cleaned and with the terminals bent a little the plug was much more secure and needed a firm push to engage it. And bingo the engine started and ran near perfectly!
The sultan of swing
Top

. Haven't started it for a couple of weeks, but hopefully get to work on it a bit more once the all the house bits are cleared out for the house extension.
1971 VW Type 3 1600 TE Fastback. Body off Resto completed, now just bits and pieces and niff naff to do.
Volksworld Magazine featured car 2013
Instagram: @type3.fastback
Top

It's been a while since I've been on the forum and since Broady helped out with the starting issue back in February.

House build, and DIY has kept me really busy since April.

Although Broady, fixed the starting issue

, the engine still decided to stall once the engine was hot. It would re-start fine again, but would then stall about 30 seconds later and continue doing that every time.

So 2 weeks ago, I decided to remove every electrical connector in the engine bay and clean it up, and make sure the connector was nice and tight.
Having done this, the engine runs lovely and hasn't stalled

So, then I've fitted my new Pertronix Flamethrower 8mm HT Lead set and the engine even better.

Yesterday, was a special day. Having had issues getting the car off my drive as it was too low (I adjusted the rear ride height 25mm higher in January) we attempted to see if it now clears. It was a success, so after 3 years since I bought the car and done a body off resto, I manged to drive the car up and down my lane a few times.

I'm now itching to get out in it for a longer run.

Next - I need to fit the front part of the carpet, hand brake gaitor, and shelf. It's then done.

Great news! So pleased it was a fairly straight forward fix in the end. Glad I was able to help! Keep us updated on your enjoyment of the car

So last weekend (whilst it rained) I secured all the speaker cables, fitted the 2 remaining front bits of carpet, and fitted the handbrake gaiter.

Only thing I have left to fit is the bamboo shelf. Which might not get fitted as I think you need to use the wing bolts which are hidden below the new carpet. Doohhhh!

Also have the wide sill trim to fit, but might leave this until I've sorted out my rear quarter torsion holes.
1971 VW Type 3 1600 TE Fastback. Body off Resto completed, now just bits and pieces and niff naff to do.
Volksworld Magazine featured car 2013
Instagram: @type3.fastback
Top

Today I took the car out for a longer run (not just up my lane and back). Went to the petrol station and filled her up too.

Did about 10 miles, with exception to one slight hesitation whilst going around a corner (??? not sure what that might have been) the run went great.

Got the car up to 60 mph. Considering I only did the front tracking with a tape measure seems to stay in a straight line quiet well. I will need to get it in a garage for a proper alignment though.

Front suspension is a bit hard, think the front beam might need a good looking at (or replacing).

Pictures I took after I got back. 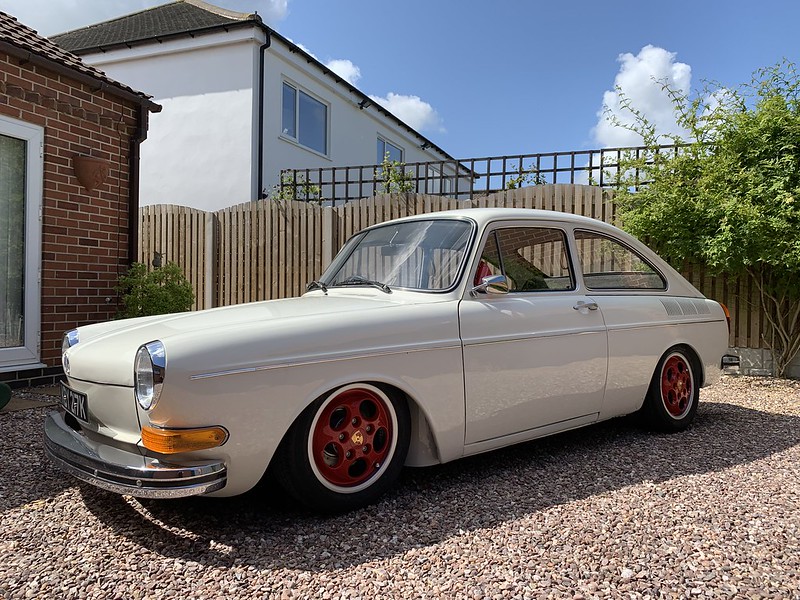 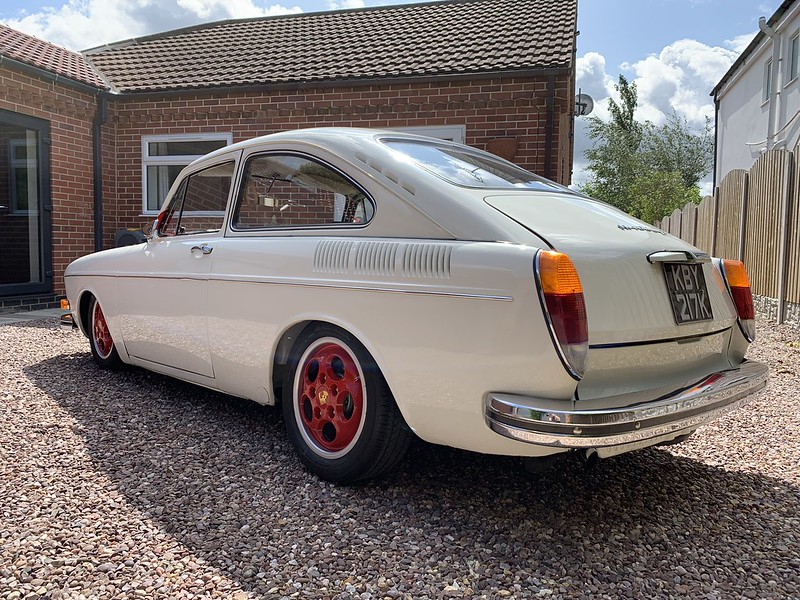 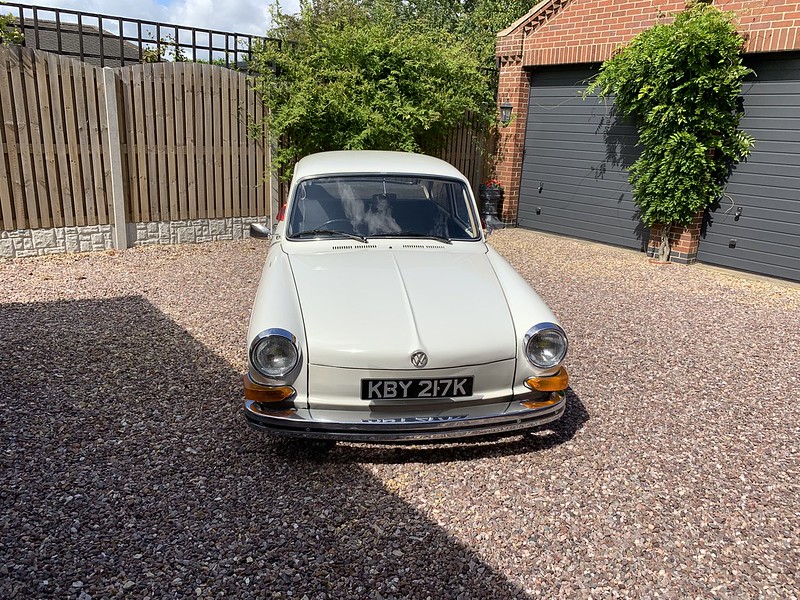 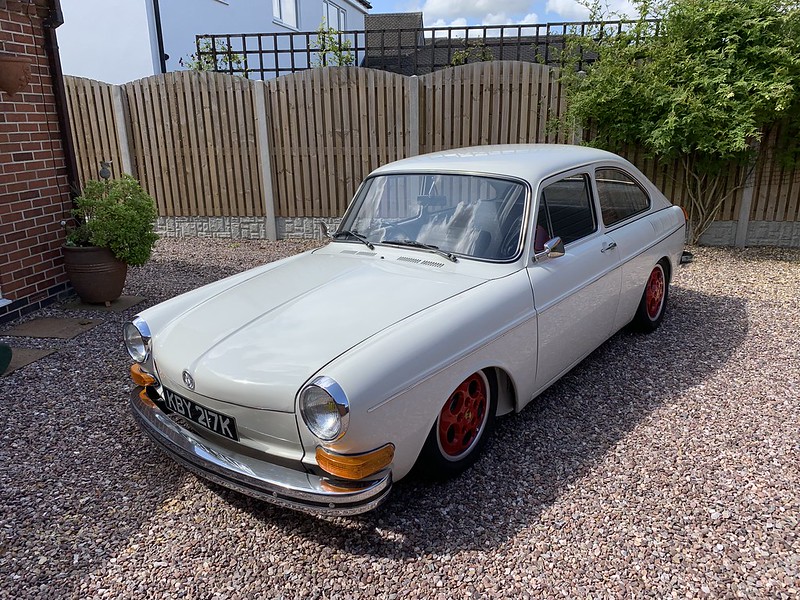 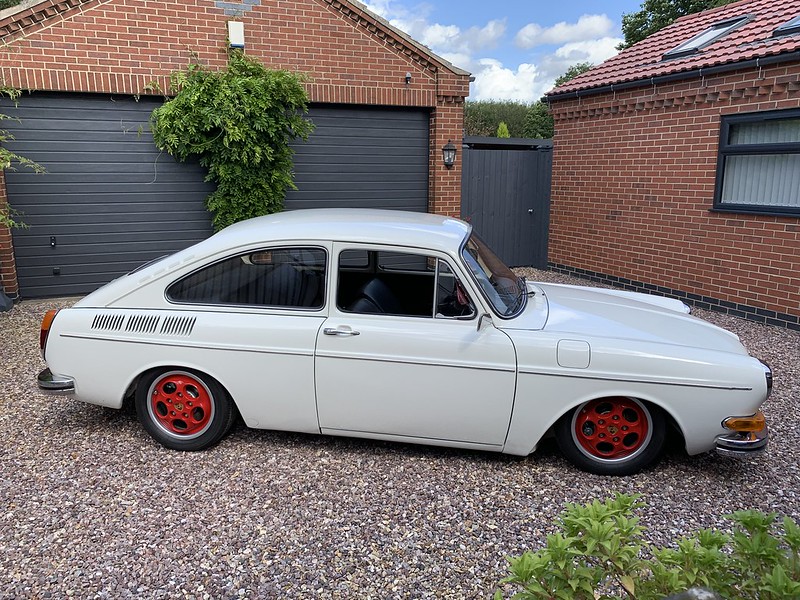 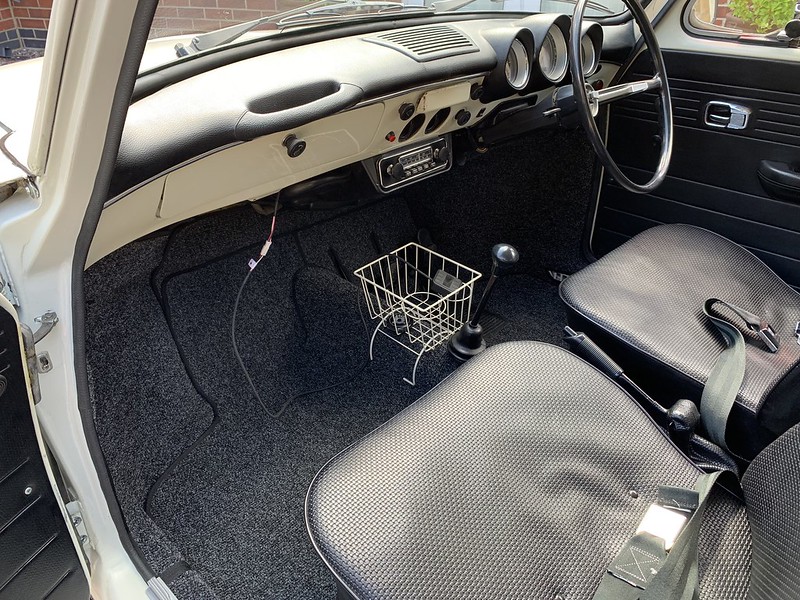 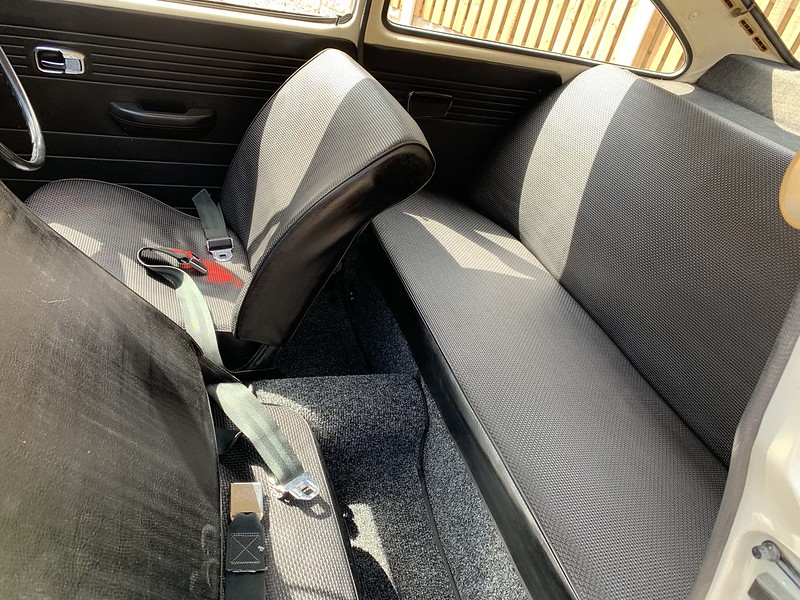 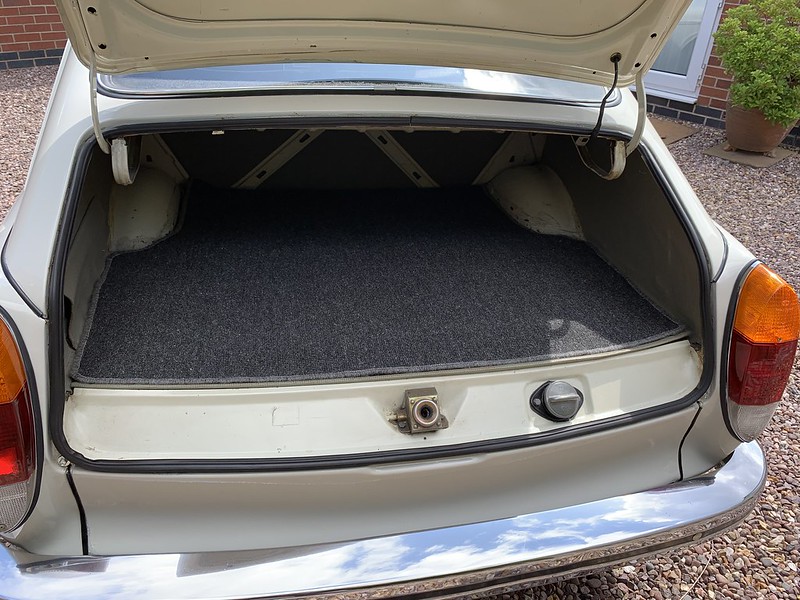 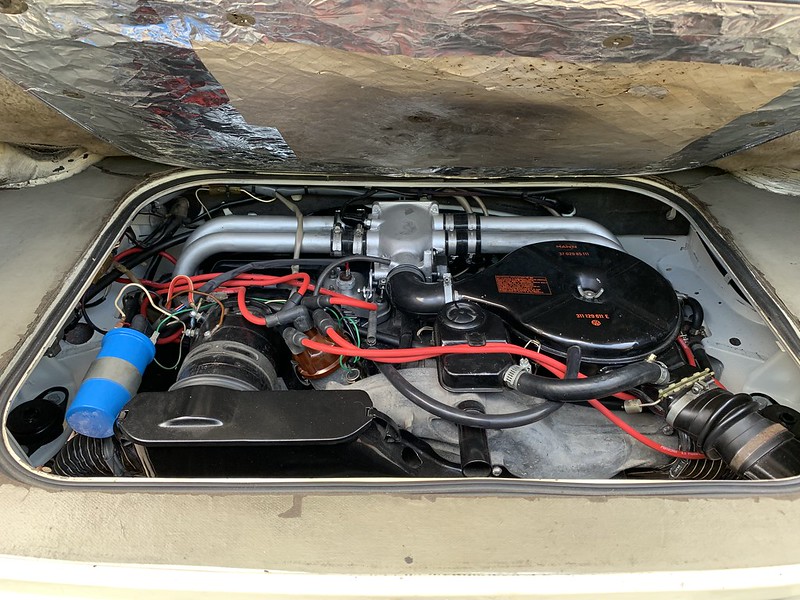 That is looking very well, its nice to see it out on the road at last! I wouldn't focus too much on any little issues, more often than not, a bit of use will help it all settle
The sultan of swing
Top

So after finally getting the car running I went to 2 car shows late Summer, the Classic Car show at Thoresby Hall and the Drivers Collection with Clique 53 car club. 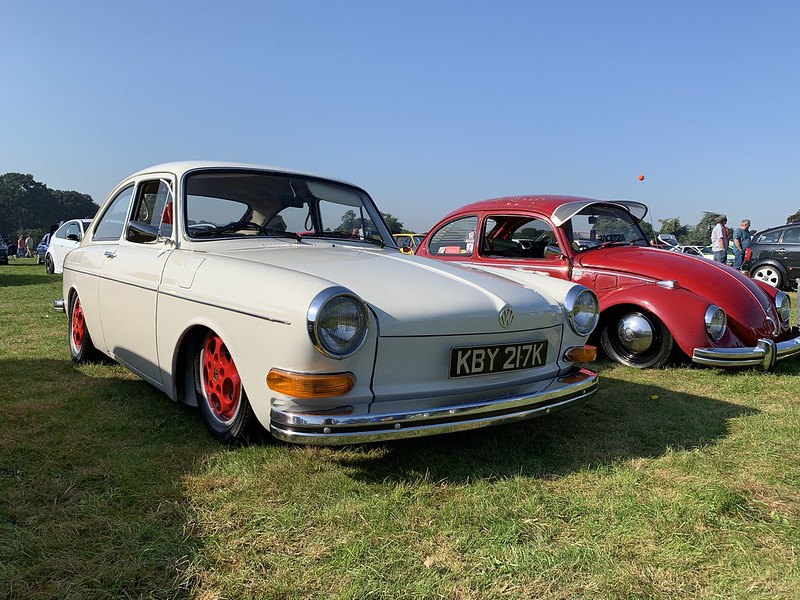 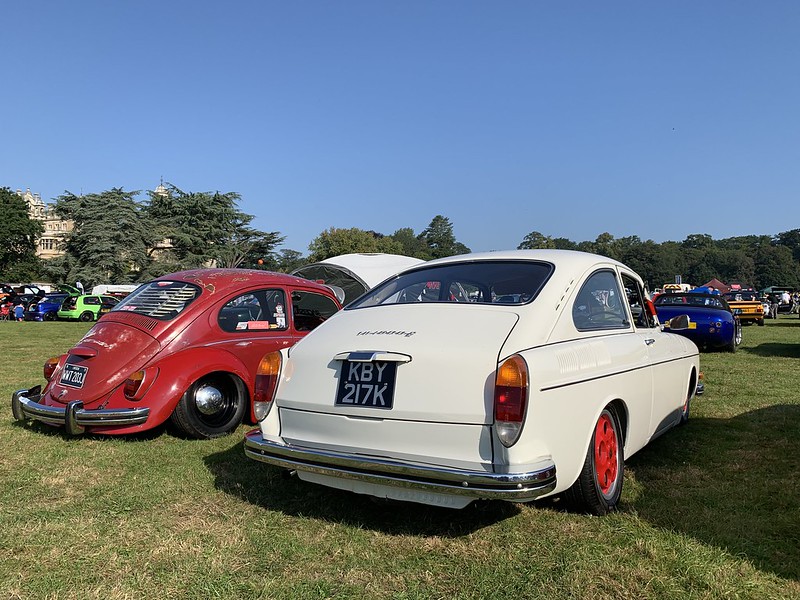 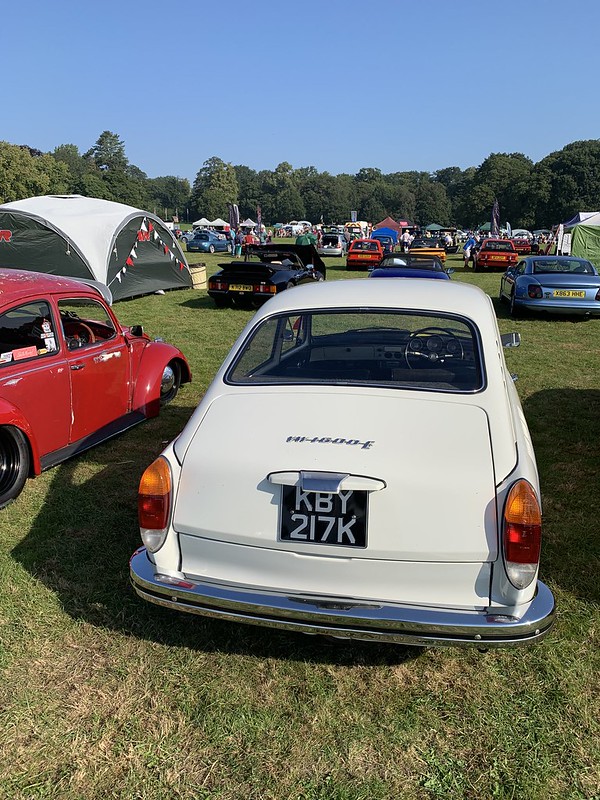 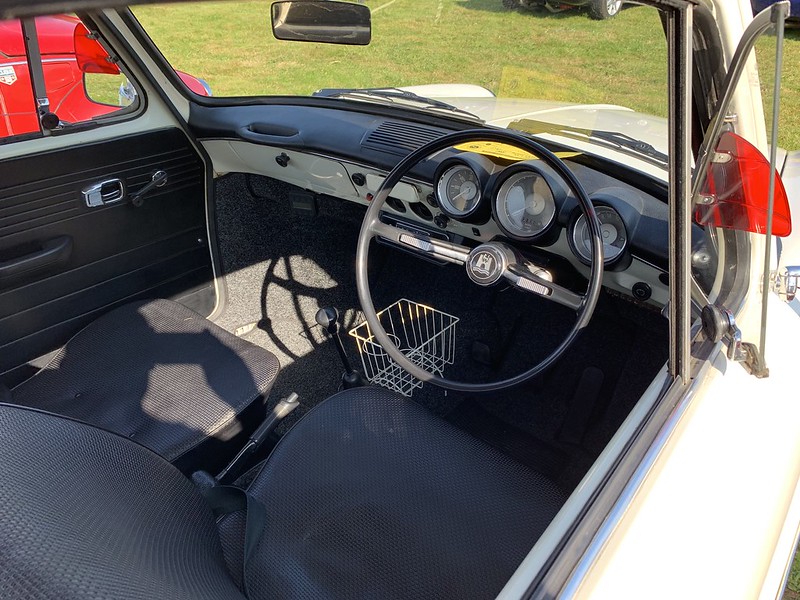 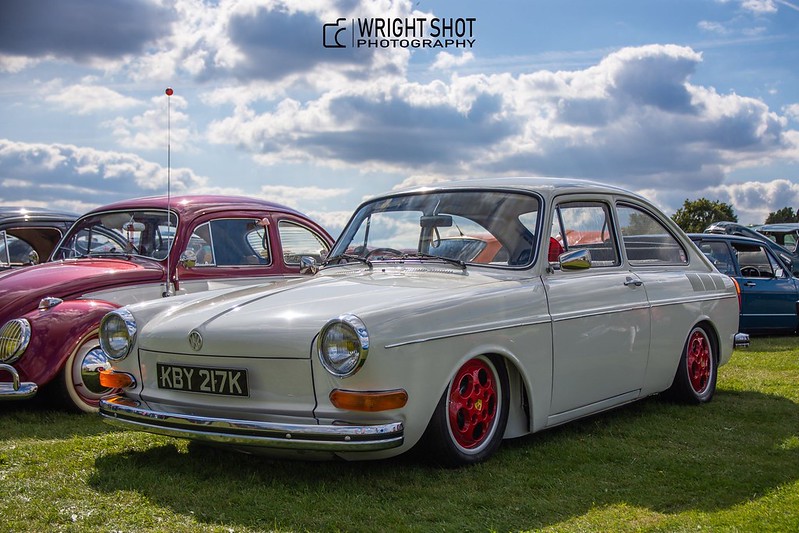 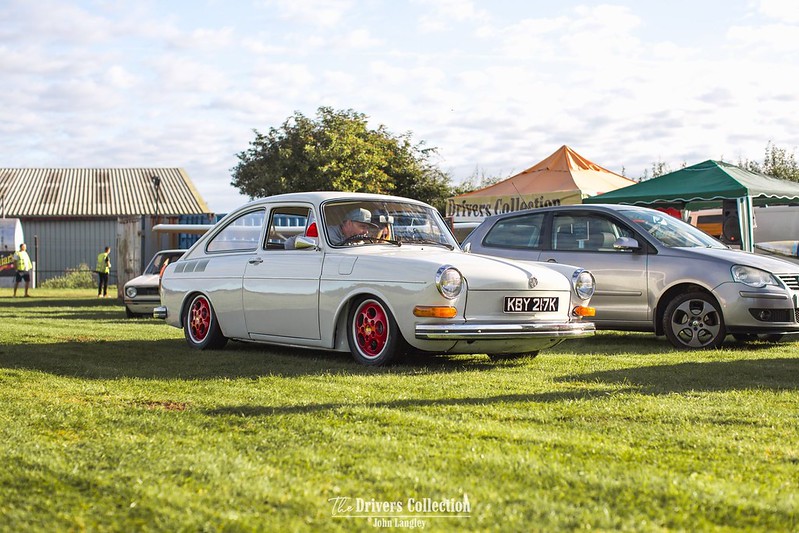 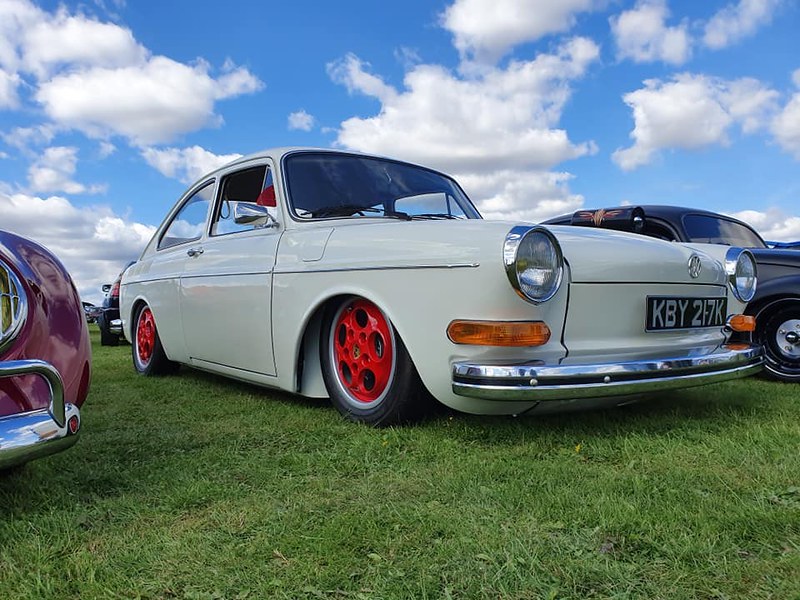 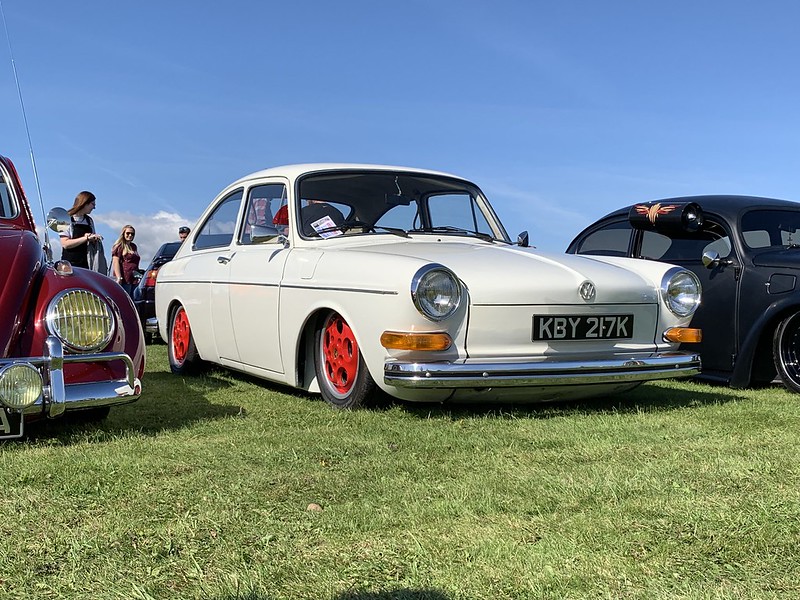 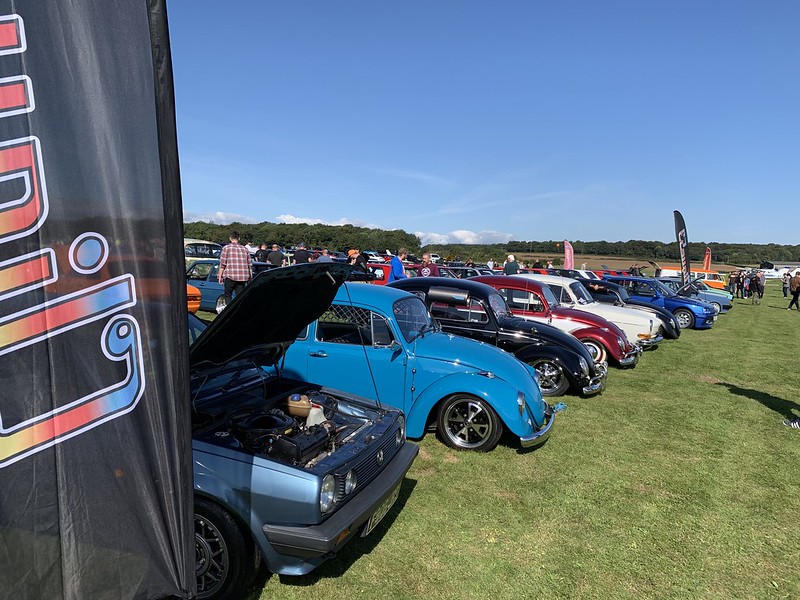 Wasn't sure at first but they are growing on me.
1971 VW Type 3 1600 TE Fastback. Body off Resto completed, now just bits and pieces and niff naff to do.
Volksworld Magazine featured car 2013
Instagram: @type3.fastback
Top

Ok, so another update; so having been to 2 car shows I've got my car showing mojo back. So this winter I've decided to take the car up another notch (Pardon the pun) for next years shows and beyond.

So under some secrecy the car has been at Eva Resto for the last 5 weeks having some serious suspension work carried out. I wasn't happy with the ride height of the front beam as it was not originally designed for air (Static beam) so the range was poor and the ride was harsh.

Max at Eva Resto also put some new front tubs in so that there was the correct clearance all round.

Picked up today, the car is awesome.

I've pretty high standards, and Max has surpassed my expectations with the quality of work. I would highly recommend them. 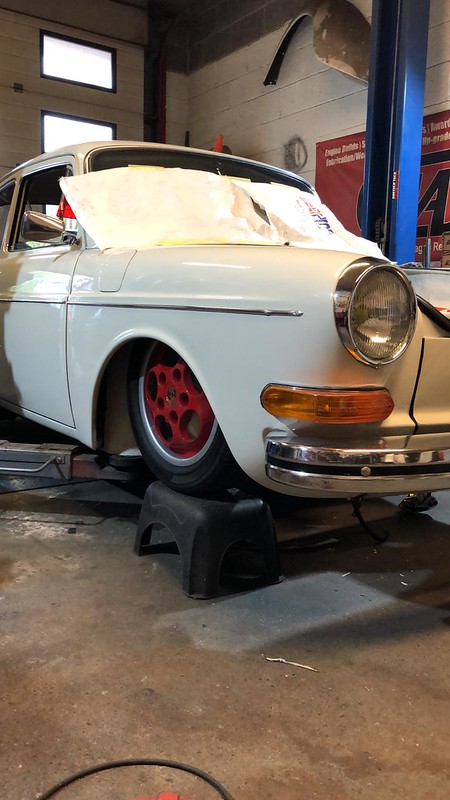 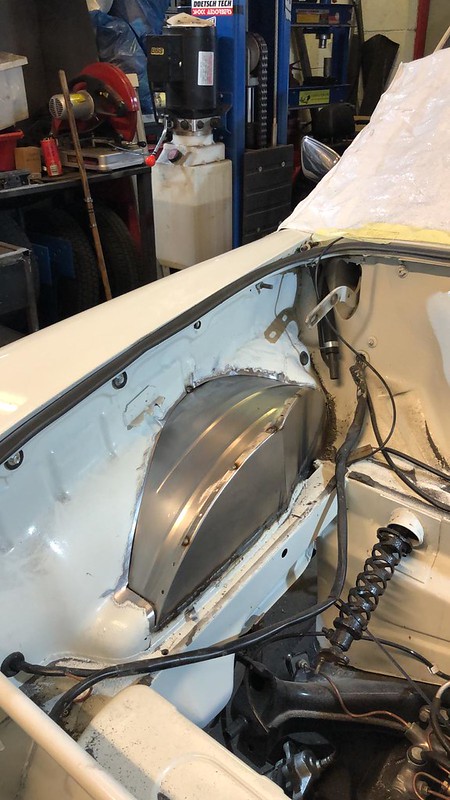 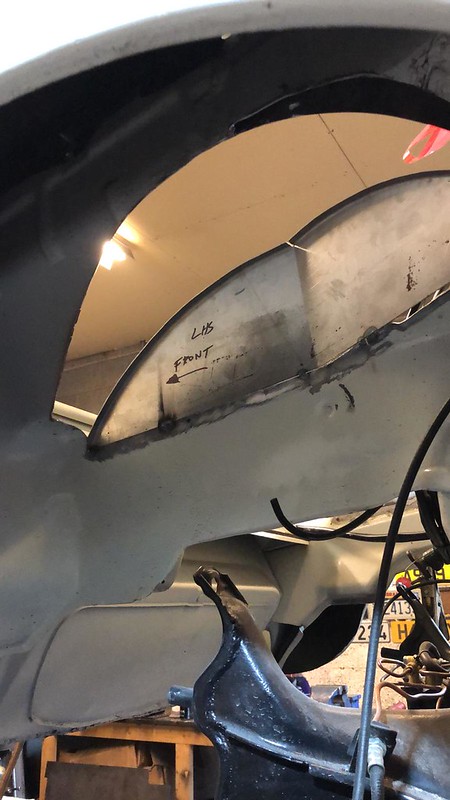 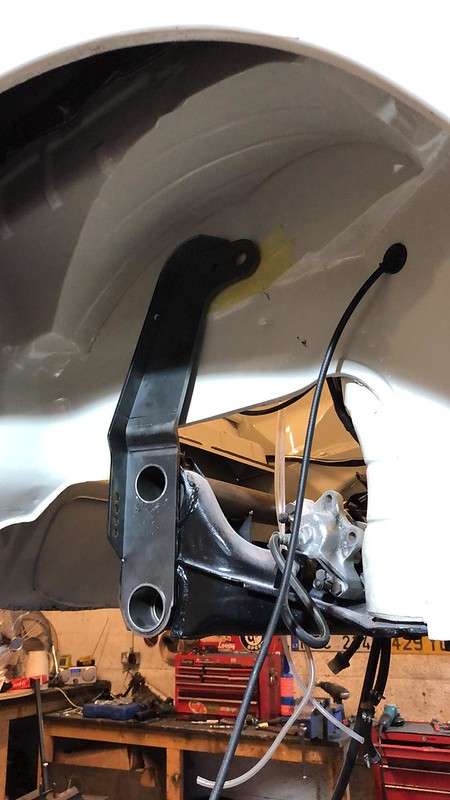 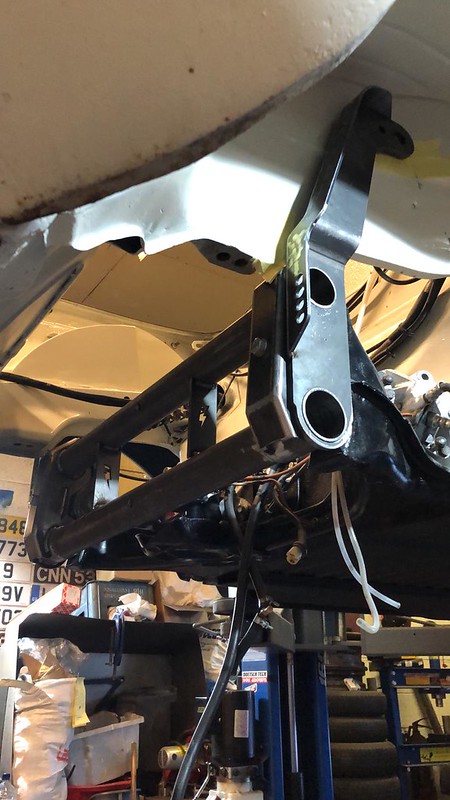 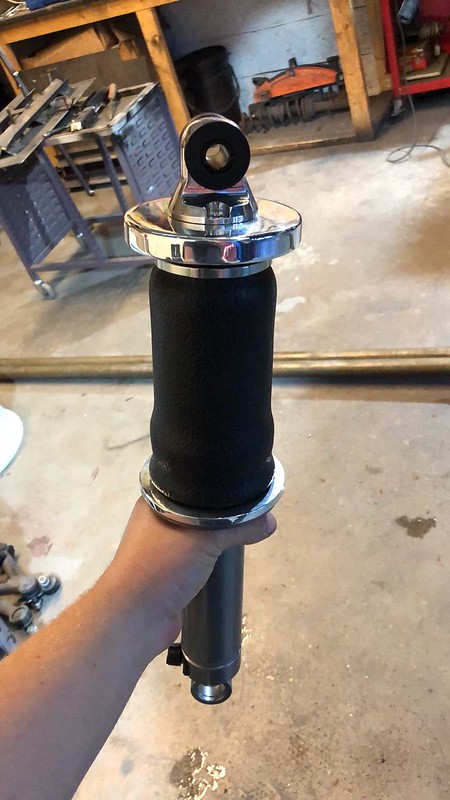 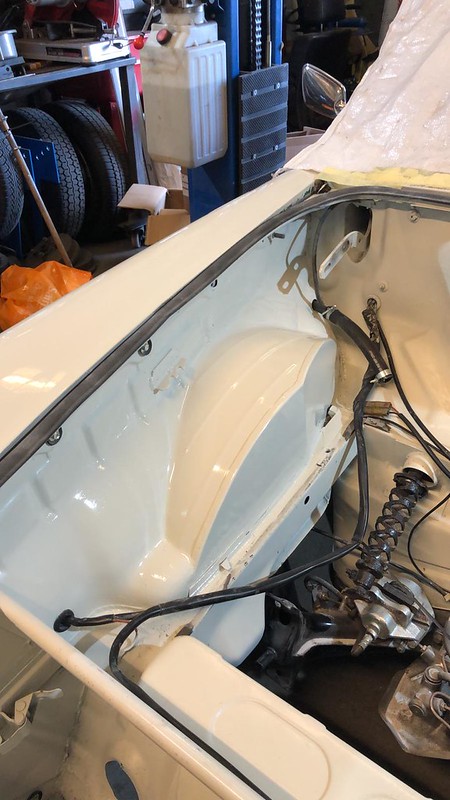 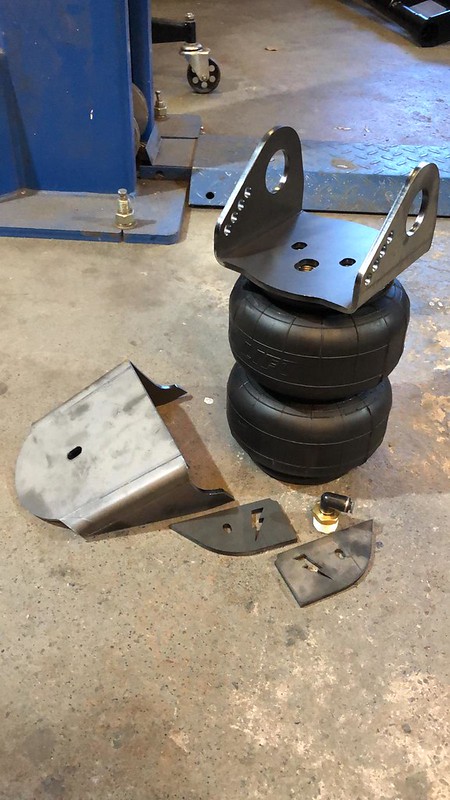 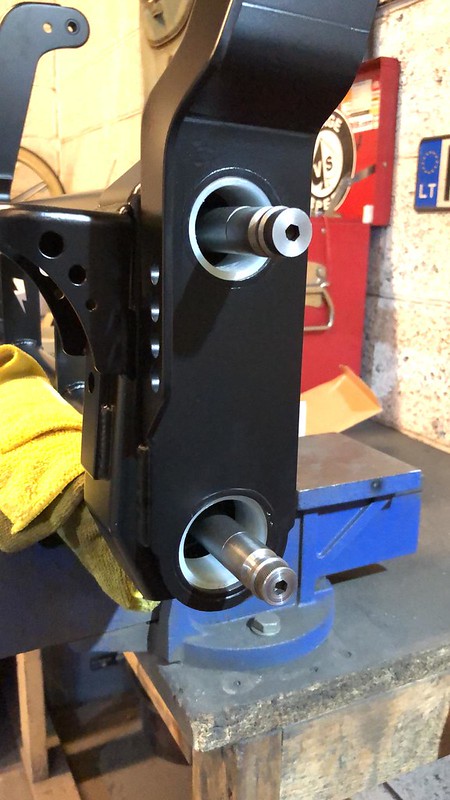 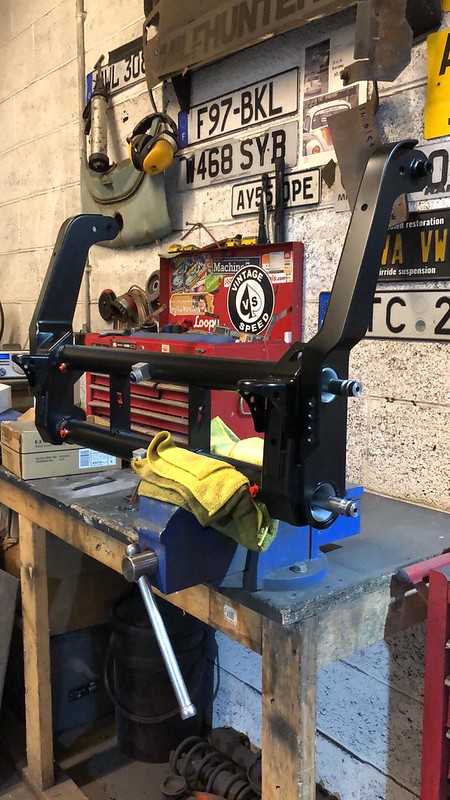 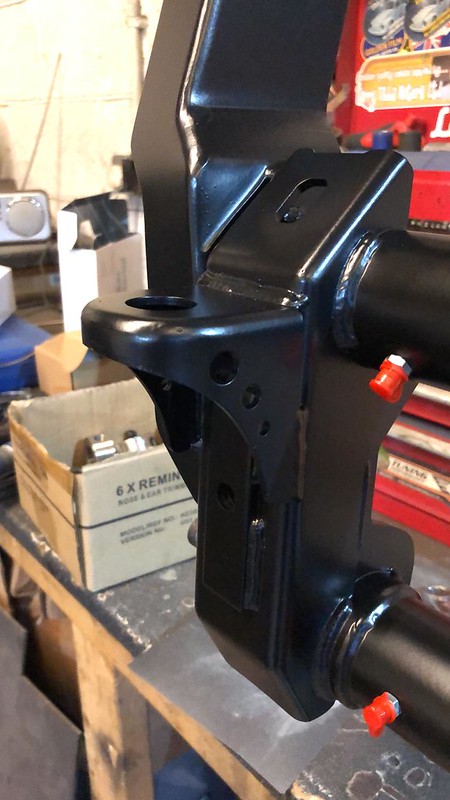 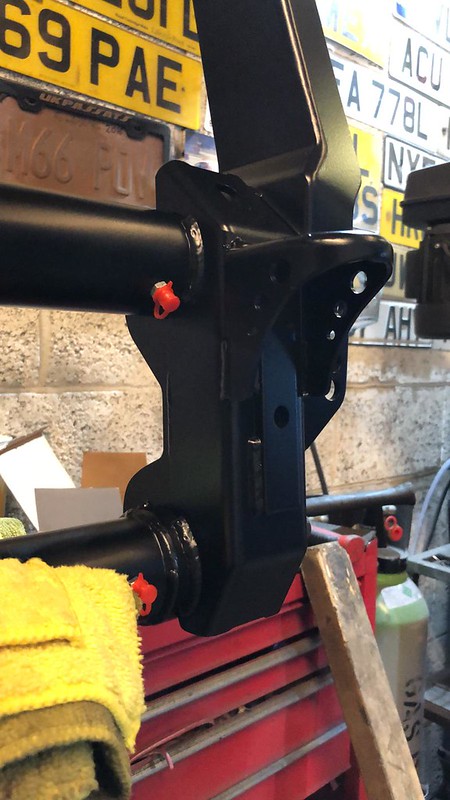 I have that rear set up on my fasty, works a treat!
Looking forward to seeing it at some shows next year!
Top