Before I full fitted the rear seat in I needed to secure my 2nd battery somehow.

I was looking at all sorts of options like universal battery trays, straps etc. But they all needed to be secured to the floor plan. I did not want to drill into the floor pan.

And just like that one Saturday morning I thought of an idea of bracing the top of the battery against the body and cross member that the seat sits on. The bracket effectively jams up to the body/floorpan and will bolt to the cross member.

So out came the cutting disc and welder and I fabb'd up a bracket.

Works a treat and secures the battery quite well. 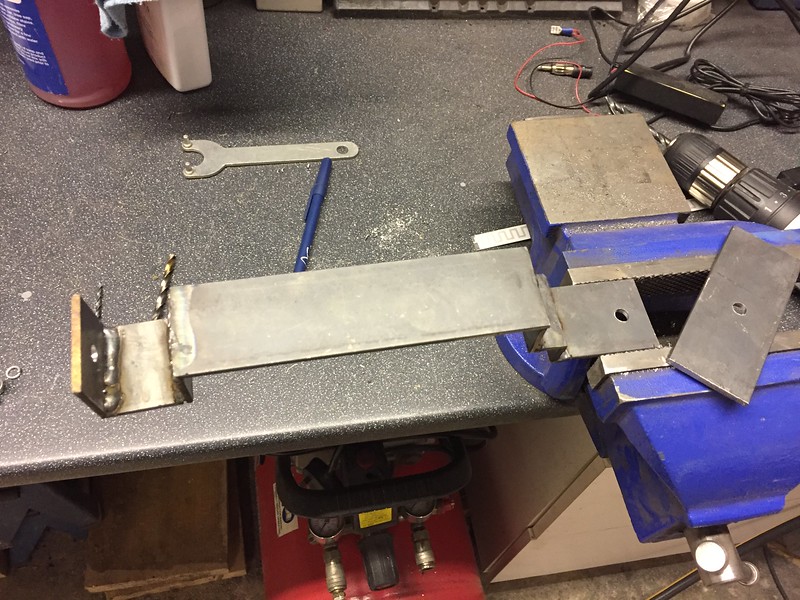 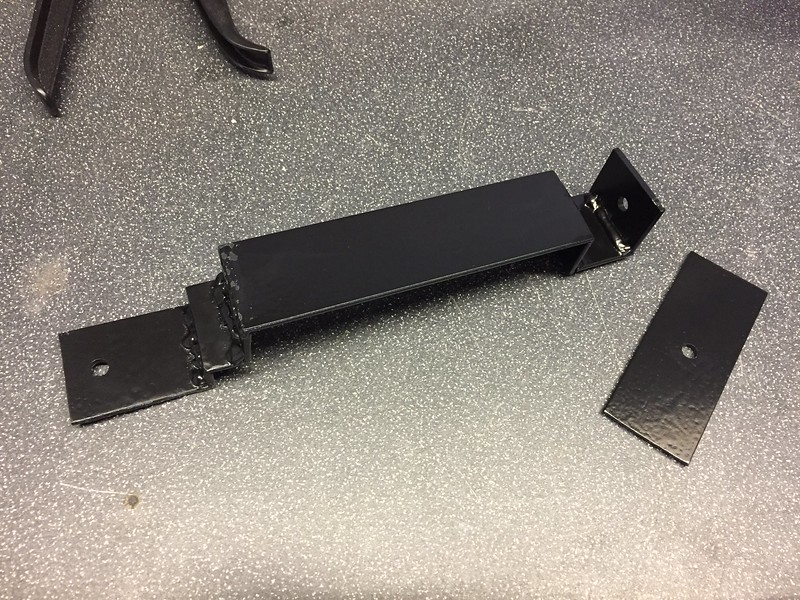 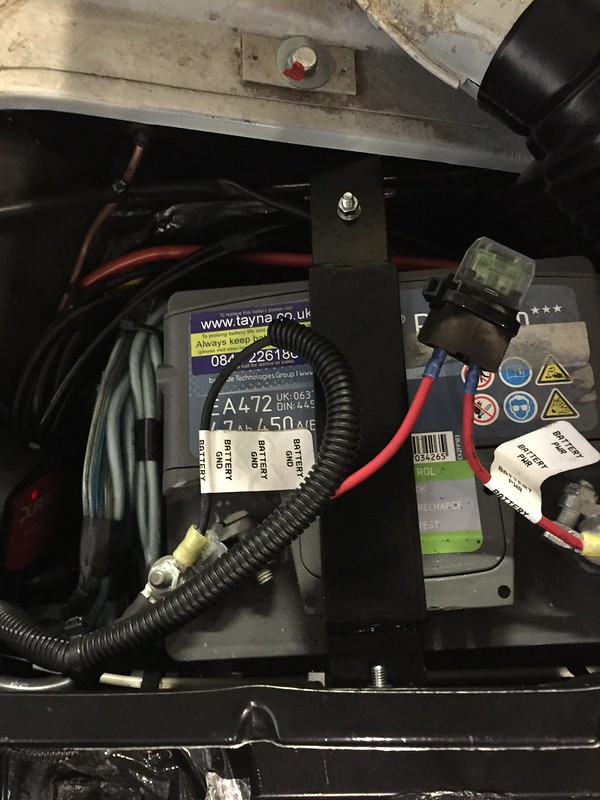 Once battery was secure I fitted the back seat. 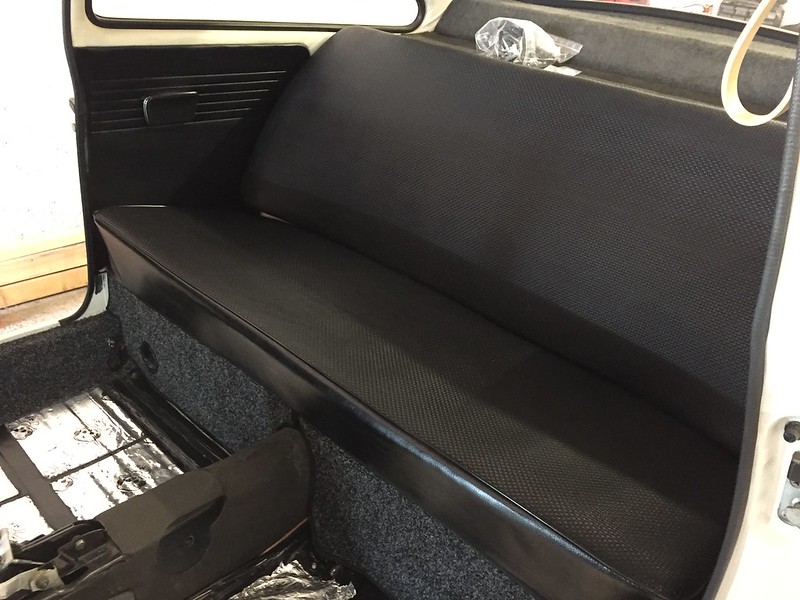 Here's some pics of the car as it is.

No idea when it'll be back on the road. Depending on the success of the 3rd master cylinder I may have to resort to fitting the original drum brakes to the rear of the car. 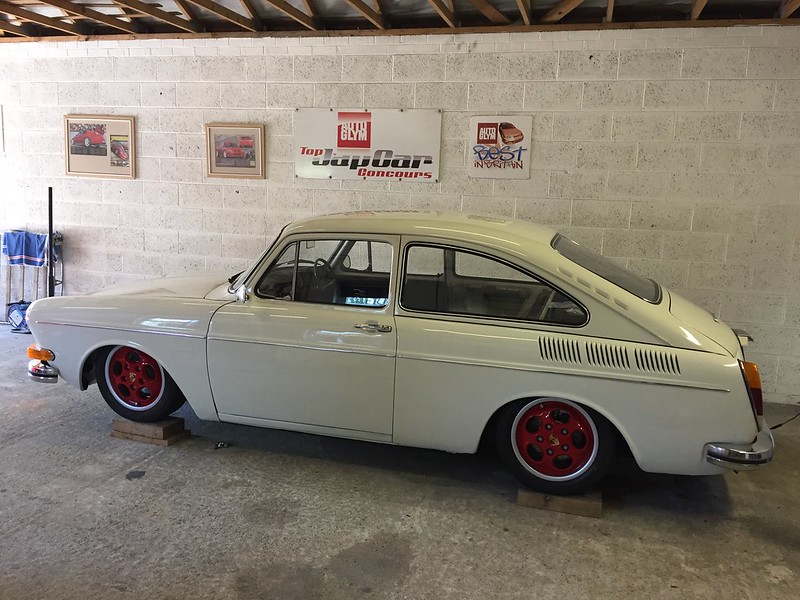 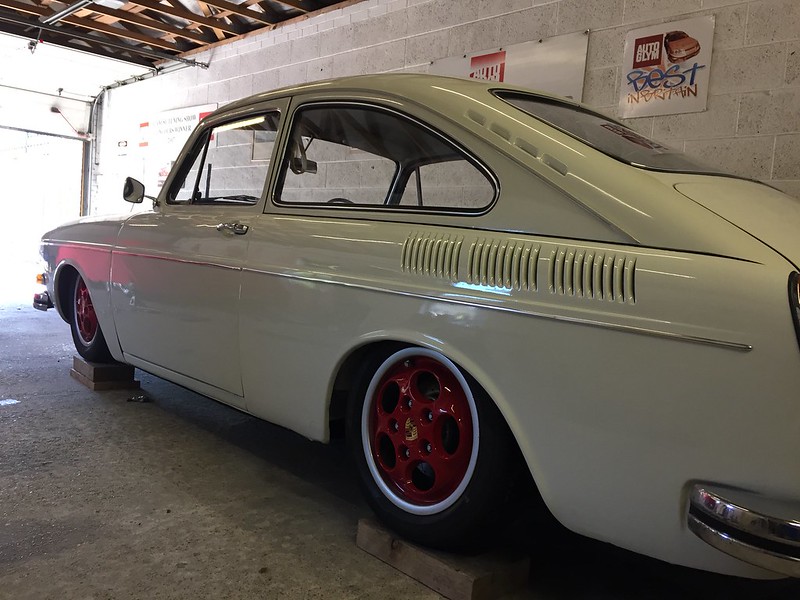 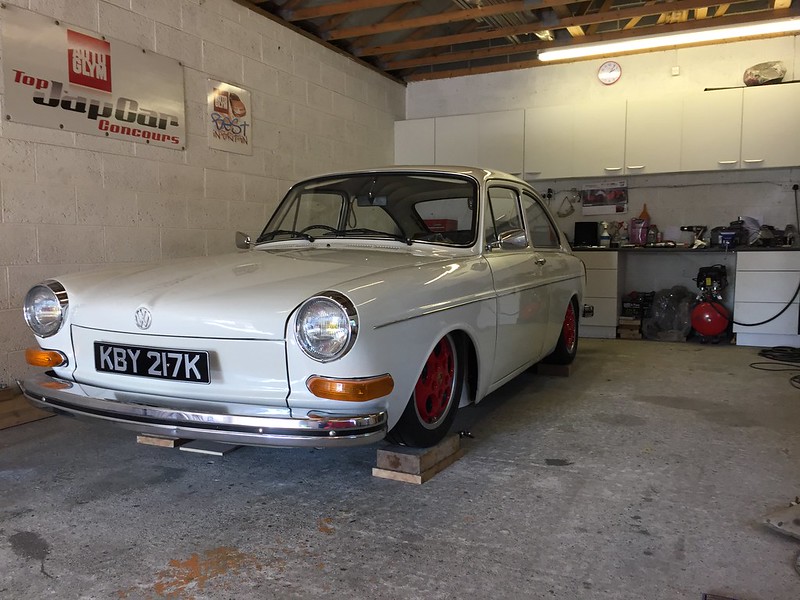 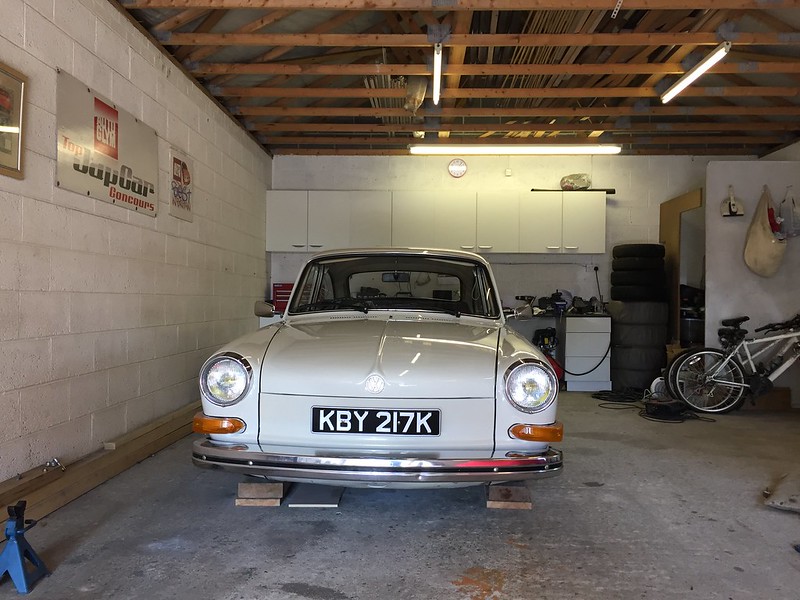 that's looks very tidy! drum brakes aren't bad at all, they just need more regular maintenance. I also love the seats, have you got a link for the dye? I think i need some!
The sultan of swing
Top

He mentions Autobrite Direct for the seat dye.

Not sure what the dye transfer will be on my clothes. But I let it dry for a few days and then gave it a wipe with some interior cleaner and not much came off onto the cloth. I'll give it one more clean and I think it will be fine.

I'll be gutted if I have to remove the discs and put the drums on, but needs must if I want this bad boy on the road.
1971 VW Type 3 1600 TE Fastback. Body off Resto completed, now just bits and pieces and niff naff to do.
Volksworld Magazine featured car 2013
Instagram: @type3.fastback
Top

Oh and thanks to Broady and Simon Kelly I got my seat runners today, so will probably get passenger seat whacked in this weekend.

muddy wrote: ↑
31st May 2018 - 6:21pm
Oh and thanks to Broady and Simon Kelly I got my seat runners today, so will probably get passenger seat whacked in this weekend.

No grease required, nylon is self lubricating. and if you great them they will only attract dirt and start to bind up and wear. Given that I expect you will adjust it to get comfy and never touch it again. it'll be reet

So this last week or so, I've been fitting the rear part of the carpet, seat runners and passenger front seat. 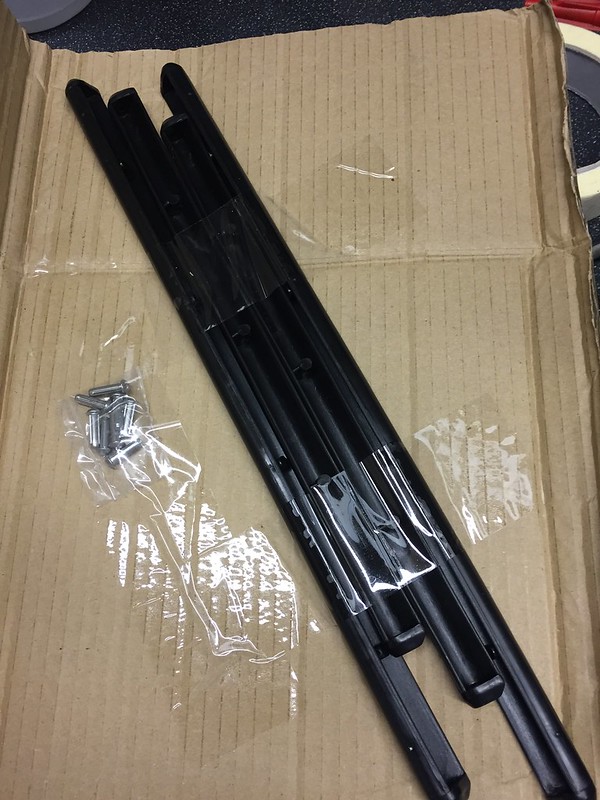 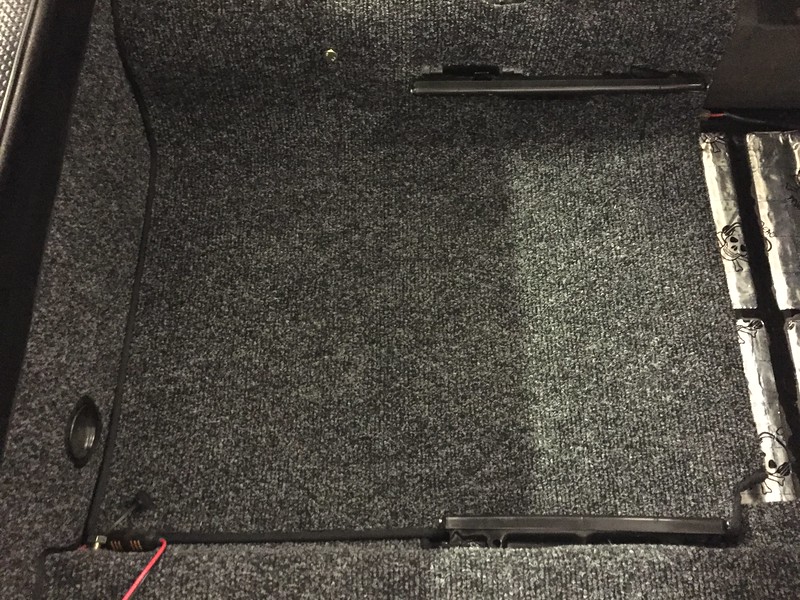 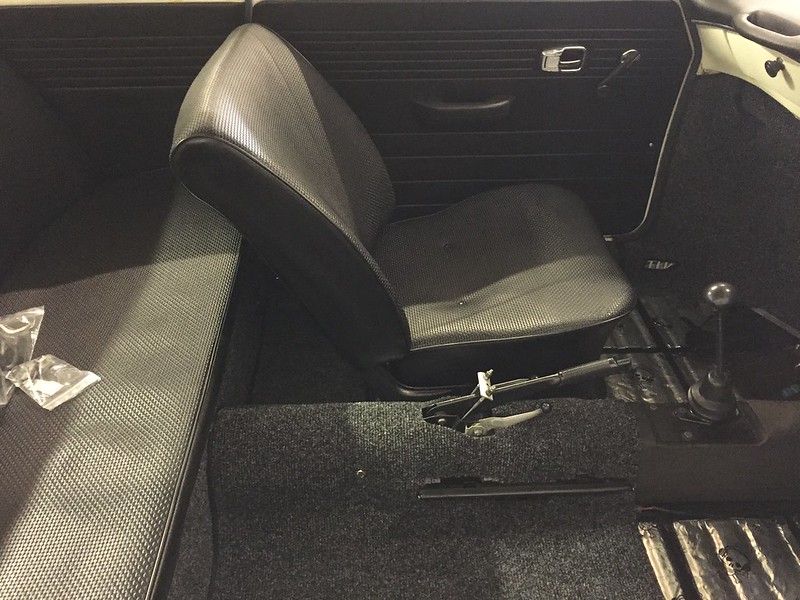 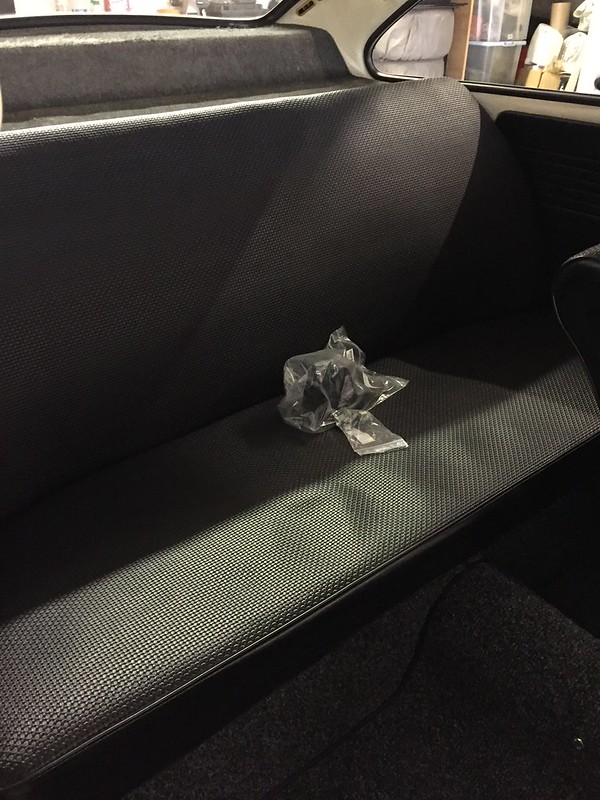 Can't really fit the front portion of the carpet until I've resolve my brake issue.

I've also fitted the Porsche master cylinder (pictures to follow) and whilst I've not been messing about with the brakes, I temporarily fitted the fuel tank and ran the engine up each evening. Started each time on the button, does need the timing adjusting so it's perfect.

Whilst doing this, I thought I'd best check the fuel sender even though it worked fine when I dismantled the car (and I'm glad I did). The fuel sender had been removed from the tank, during the resto whilst I cleaned the tank and painted it, so had not been in contact with any fuel for 12 months.

I removed the sender, and moved the float to identify a full tank, switched ignition on and it only read 1/2 tank, as well as the needle bouncing all over the place. Not good.

I first checked the resistance between the spade connector and metal chassis of the sender and the resistance didn't seem normal, I couldn't get a good reading, it jumper from 200 ohms to 2k ohms????

So I stripped the fuel sender down and measured the resistance across the resistor wire, I was reading approx 90 ohms full and 10 ohms empty, and although I didn't have the specs I guessed this was pretty accurate based on other things I've seen in the past. (thermistors etc are normally 100 ohms, so it's a normal standard value).

So I checked the resistance between the wire and the spade connector and this was good approx 0.5 ohms, however the other wire to sender chassis was pretty much none existent (2k ohms). I cleaned up any oxidisation, but I could not get the resistance down.

So I improvised and soldered a wire on the brass base plate to a ring crimp. The idea being that when it's bolted to the tank the earth will pass through the tank fixing bolt. I'll also add a new earth wire to chassis, as I don't want to be removing paint on the tank to make a good earth with the tank mounting brackets.

Once the wire was in place I checked resistances and it was pretty perfect from spade to sender chassis.

Connected to the car, and got a full tank with no needle movement, also checked other positions and the fuel gauge read perfectly.

Built sender back up, now ready to put back into fuel tank. But gonna give the fuel tank another coat of paint as it's been marked having been fitted and removed (a hundred times). 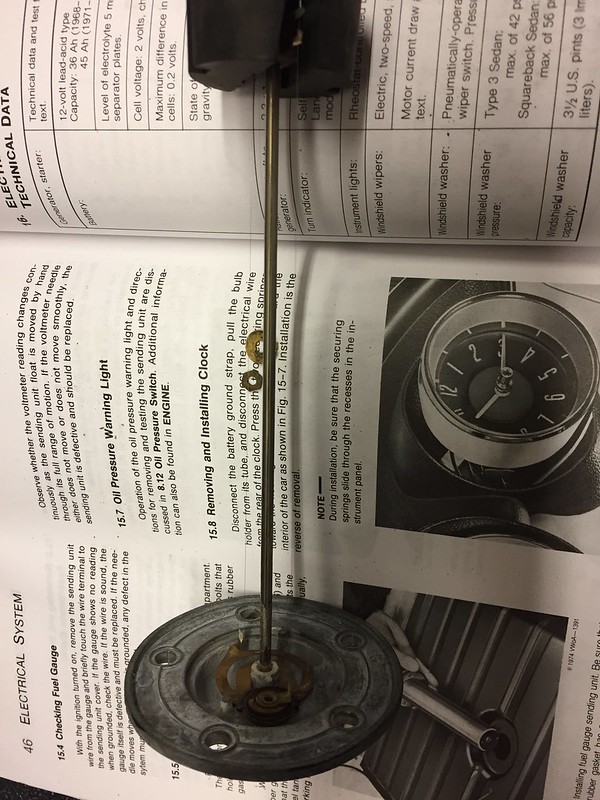 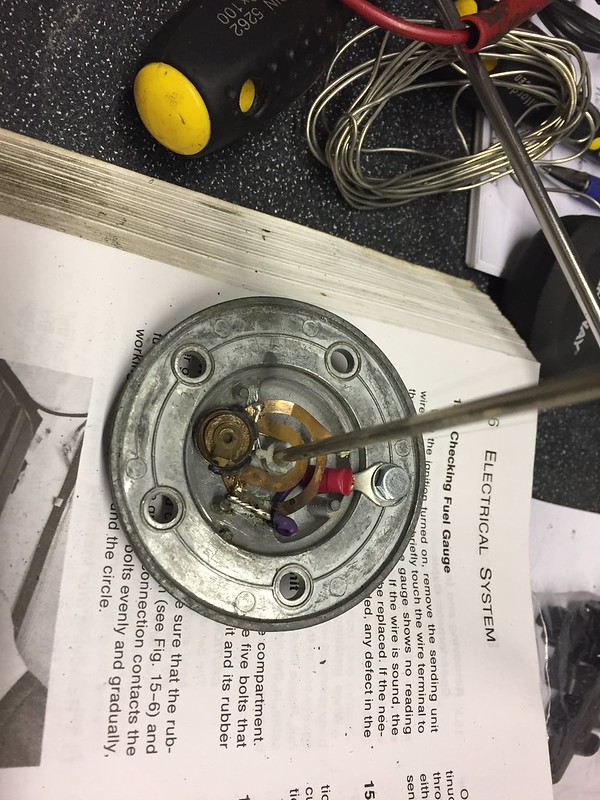 On Thursday I tackled the seat belts.

I think they are original but not sure.

I stripped them down and put them in the washing machine.

Just need to paint the brackets up silver and I'll get them fitted. 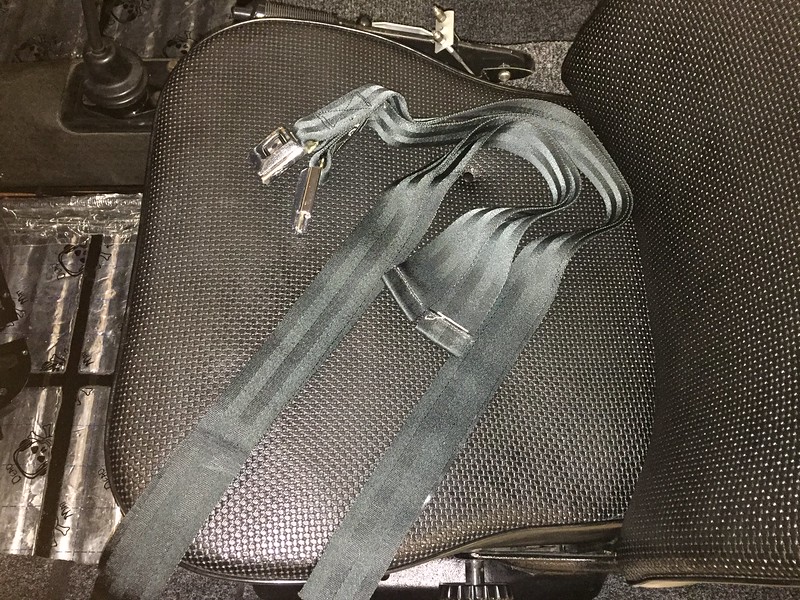 One question I have is, one of the seat belt brackets is different to the others, it's quick release ??? it attached to a ring bolt. 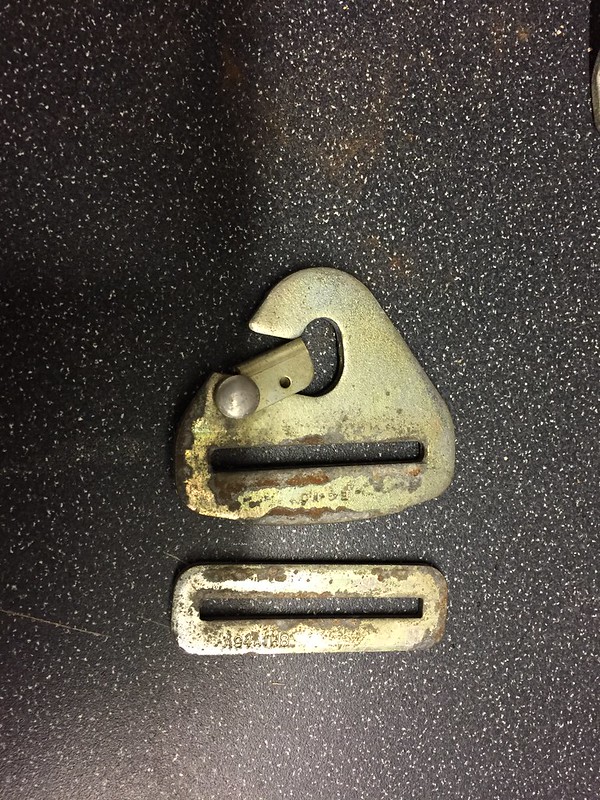 This is a normal bracket: 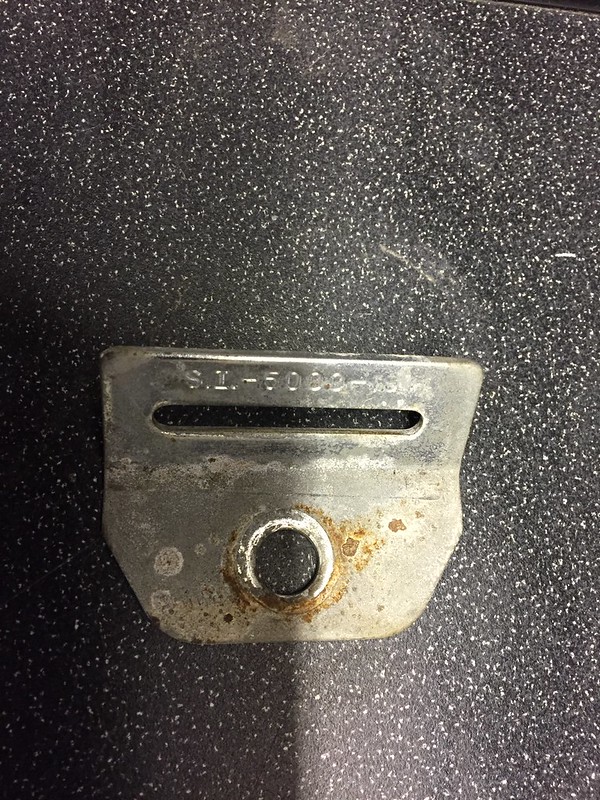 
Is the quick release bracket standard??

I'd like to to change it to a normal bracket, does any one have an old seat belt that I could have a bracket from?
1971 VW Type 3 1600 TE Fastback. Body off Resto completed, now just bits and pieces and niff naff to do.
Volksworld Magazine featured car 2013
Instagram: @type3.fastback
Top


That looks much more like its from a race harness rather than original type 3.
The sultan of swing
Top

That looks much more like its from a race harness rather than original type 3.

Yep, looks like Willans to me, the use of a ring bolt supports the theory. It's not that they are quick release, it's just the standard way of utilising existing seat belt mounting points in combination with the ring bolts. The spring clip it to prevent them coming off.
David
1974 412LS Variant
1973 412LE 4 door Fastback / Saloon
Top

I can only assume that it's replaced a standard bracket that was rusty?? And that was all a previous owner could find.

Any ideas where I could get a standard bracket from? Danny doesn't have any.
1971 VW Type 3 1600 TE Fastback. Body off Resto completed, now just bits and pieces and niff naff to do.
Volksworld Magazine featured car 2013
Instagram: @type3.fastback
Top

it looks easy enough to make, unless your die hard on original. which i assume you aren't be cause of the 944 brakes. Chain drill the slot then file it out, big hammer in a vice to get the bend. you're more than capable. Its provably easier than finding one
The sultan of swing
Top

broady_6 wrote: ↑
16th June 2018 - 8:05pm
it looks easy enough to make, unless your die hard on original. which i assume you aren't be cause of the 944 brakes. Chain drill the slot then file it out, big hammer in a vice to get the bend. you're more than capable. Its provably easier than finding one

In this instance I'd like it to be original. I've had to compromise with the 944 master cylinder to get my brakes working. I'll buy second hand set when the time comes, at the moment I'll live with the quick release bracket.
1971 VW Type 3 1600 TE Fastback. Body off Resto completed, now just bits and pieces and niff naff to do.
Volksworld Magazine featured car 2013
Instagram: @type3.fastback
Top

Just to update this thread with the brake progress, I've sourced and fitted a Porsche 944 master cylinder. Re-made all new front brake lines.

Bled the brakes and now waiting in anticipation for it to be all ok. So far so good. 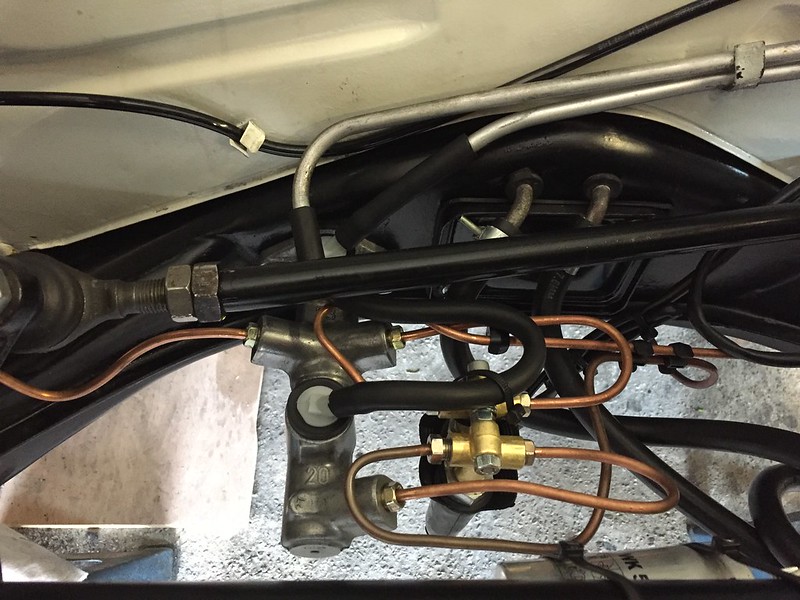 Dont know if it didnt submit, but theirs no wanted add gone up for the seat belt bit, just the pushrod.
The sultan of swing
Top

Awesome work mate!! I’m having similar issues with the car not going low enough too.. going to get some lower shock re-locators and modify them so they are 2-3” lower to get the beam on the floor. What are you doing as far as steering goes? Flipped track rods? Quick steer?
Top

Don't know if you've seen this but found this on Youtube:

How are you getting on? we haven't heard from you for a long time
The sultan of swing
Top

The Fuel sender overhaul is dealt with at http://home.clara.net/hallvw/fuelsend.htm . Another member had the same problem and fixed id somewhat similarly.
Dave.
Top
Post Reply
177 posts