Last time these 87 barrels saw fuel, was here 3 years ago.
Only decided to strip it was to replace gaskets ect. Then I realised the
push rod tubes could do with changing,

If I tried to get into that, I,d do meself an awful mischief so i would

If you want to read about VW's, home built aircraft and other stuff, try the Bob Hoover pages. He's the bloke the "Hoover bit" on type 1 engines is named after.
Unfortunately they've only saved 2006 to his death in 2010, but they're worth reading.

But considering the heads are in new condition, it appears that some money was spent
on it before I got it. So now that I know what the spec is, I can crack on tomorrow with the
glazebusting.

And ordering the new rings, the pushrods. 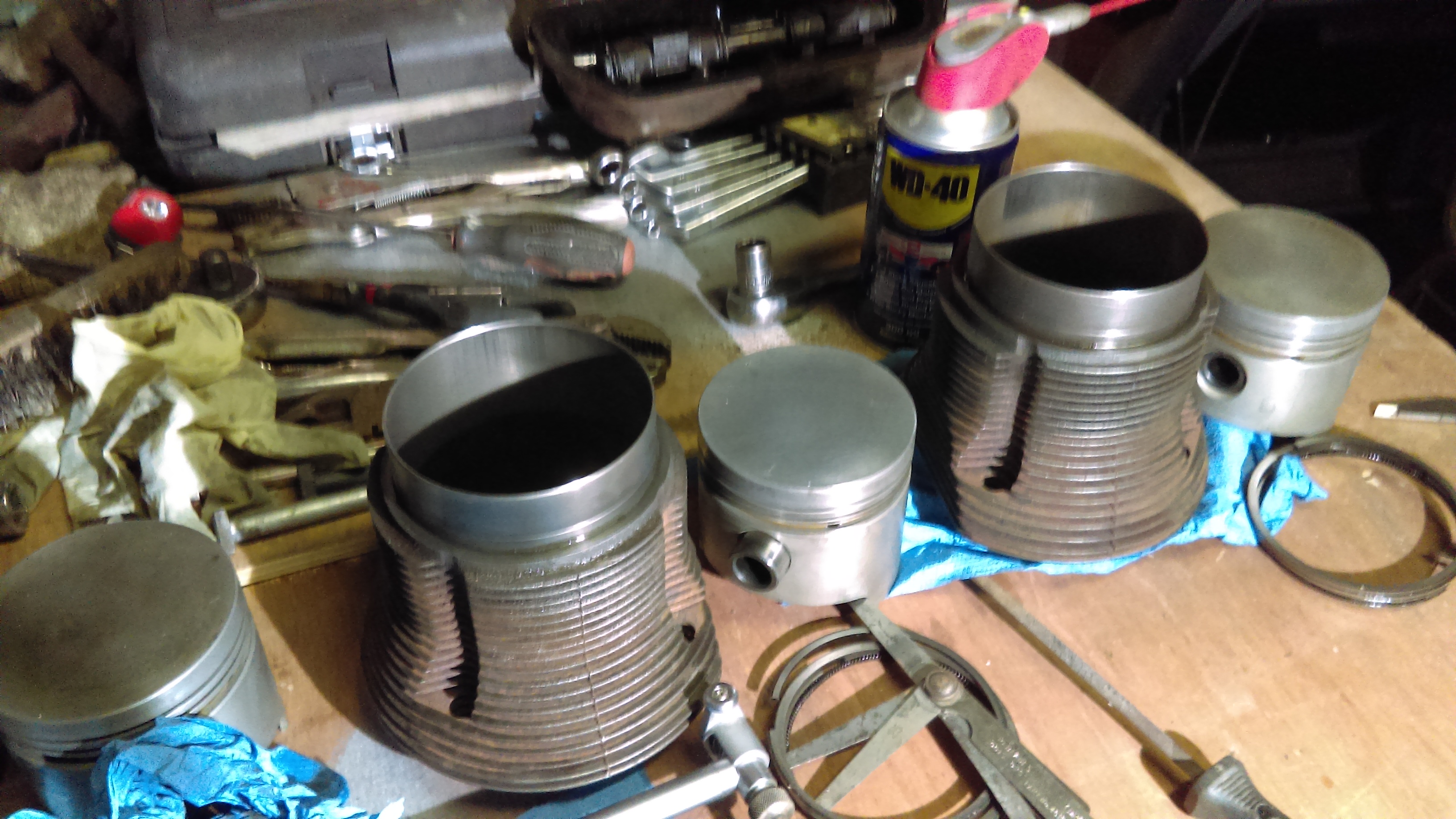 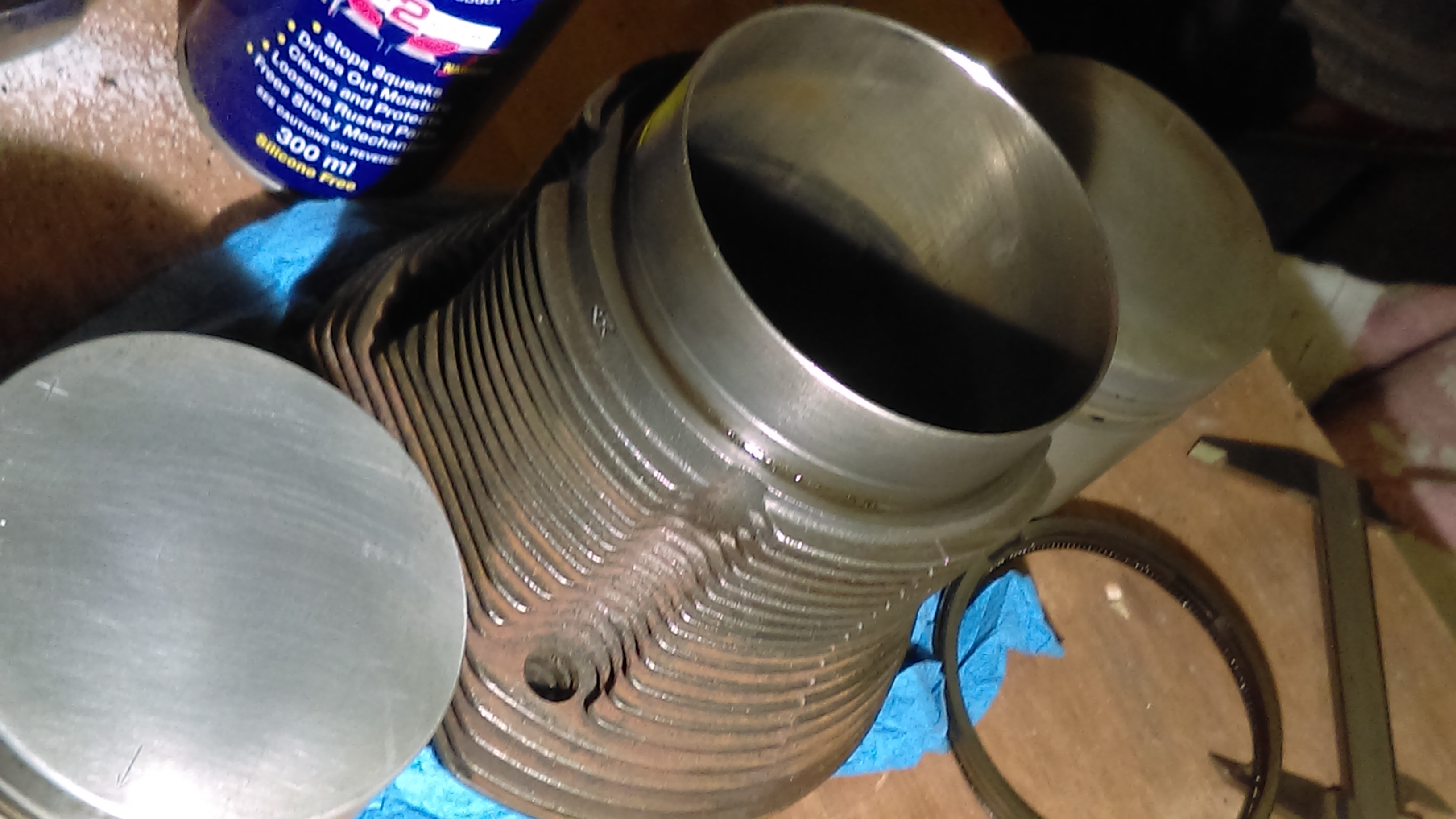 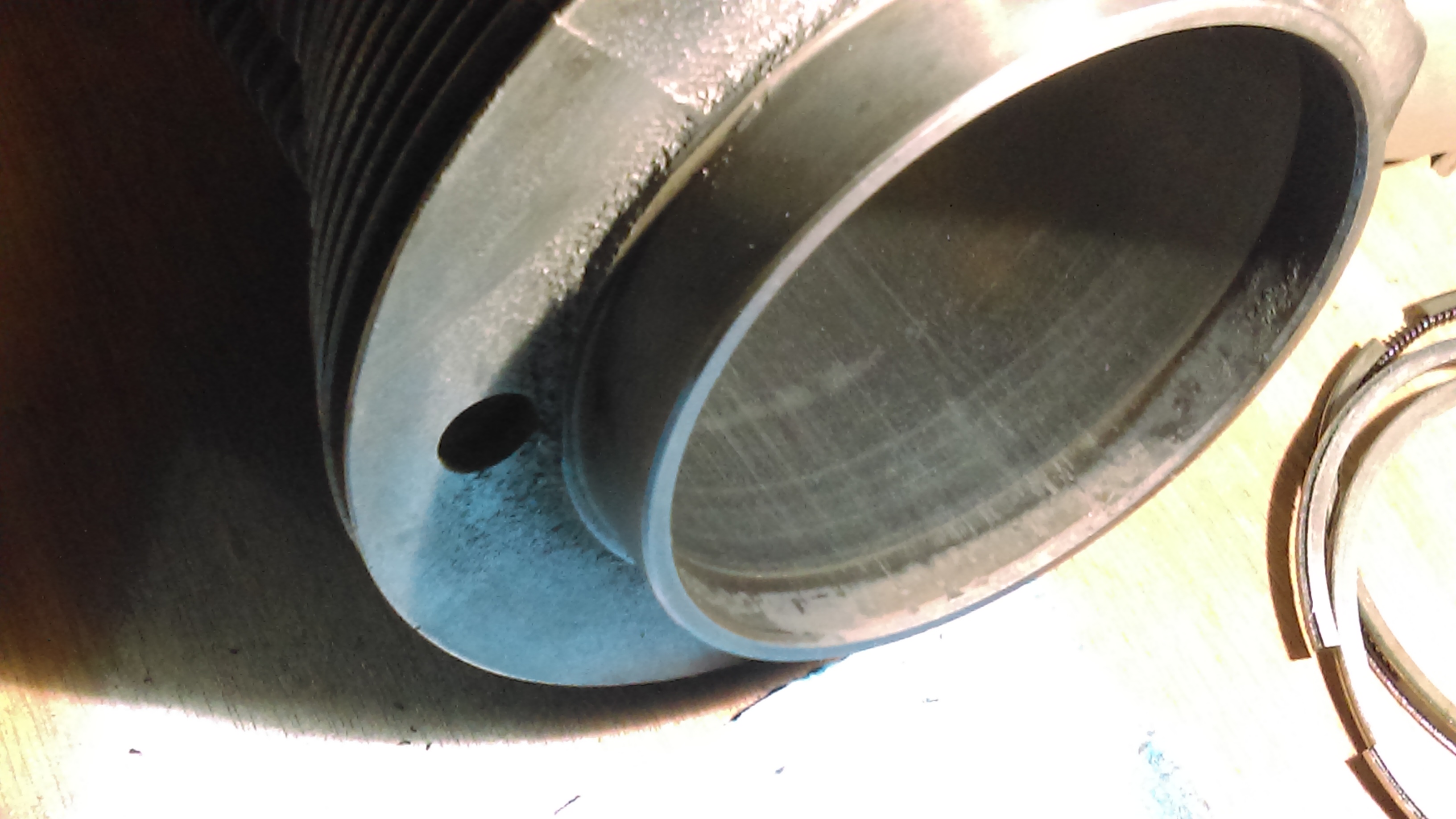 I,ll be using kerosene too when I,m honing. WD was there from stripping the tinware from the engine
on the engine stand. Honing tomorrow, and looking forward to the therapeutic element of the job.
Nice to get a change away from the bodywork for a spell.
I,ll keep you posted.
http://s1093.photobucket.com/user/beetl ... t=3&page=1
Top

The worst barrel of the bunch seems to have faired well after its honing,
and remained within limits, so its looking ok . 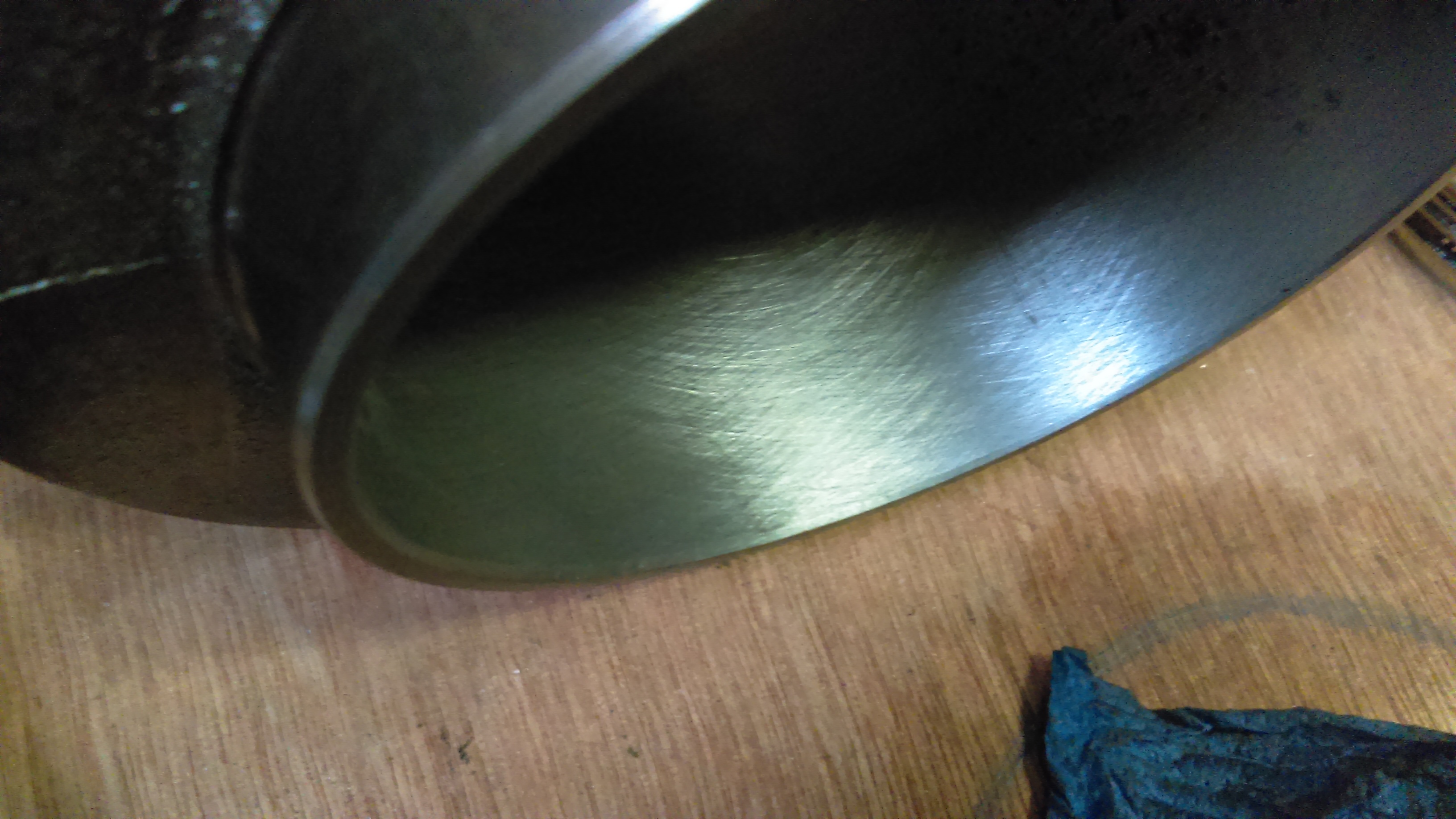 Another winner! When you say new push rods? Do you mean push rod tubes? Or has you got some bent rods?
The sultan of swing
Top

Typo being more prevalent now the older you get

Yep new tubes, the current one's are not leaking, but getting scabby looking.
Thats really the the reason for the stripdown. Stainless steel at 60 euro for the
set sound good.

Honing worked a treat as you can see.My existing hone was due a replacement,
so I ordered the only one that was available in a days delivery.Only to discover it was
a cheap tat brand when I opened the package, which I did not know when i ordered.
I knew it would not last, and it didn't. Hones disappeared into dust after 15 minutes.

So more diligence the next day was spent sourcing, and driving 50 miles roundtrip,
and paying 4 times as much, which did not worry me, for the right tool.

Job done it was great to use, and performed with perfect results. The hone stones quality
looks as though its not been used at all after 4 pots. Great
http://s1093.photobucket.com/user/beetl ... t=3&page=1
Top

Question.
Been doing a lot of reading about plateau honing.

Is it something I need to do here. Only ever did glazebusting before
a new ring install. Are the benefits worth it?
http://s1093.photobucket.com/user/beetl ... t=3&page=1
Top

During the engine stripdown , there was one stud that had a missing nut, which needed
further investigation. And I then noticed that there were 2 more threads exposed on this stud
than the other studs.

So when I was rebuilding the engine, i paid particular attention to this stud.
And my attempts to bring this stud up to torque, resulted in the stud failing this
and moving.
So only option here was to insert a case saver,

Tap wrench with an extended section that allowed easy access 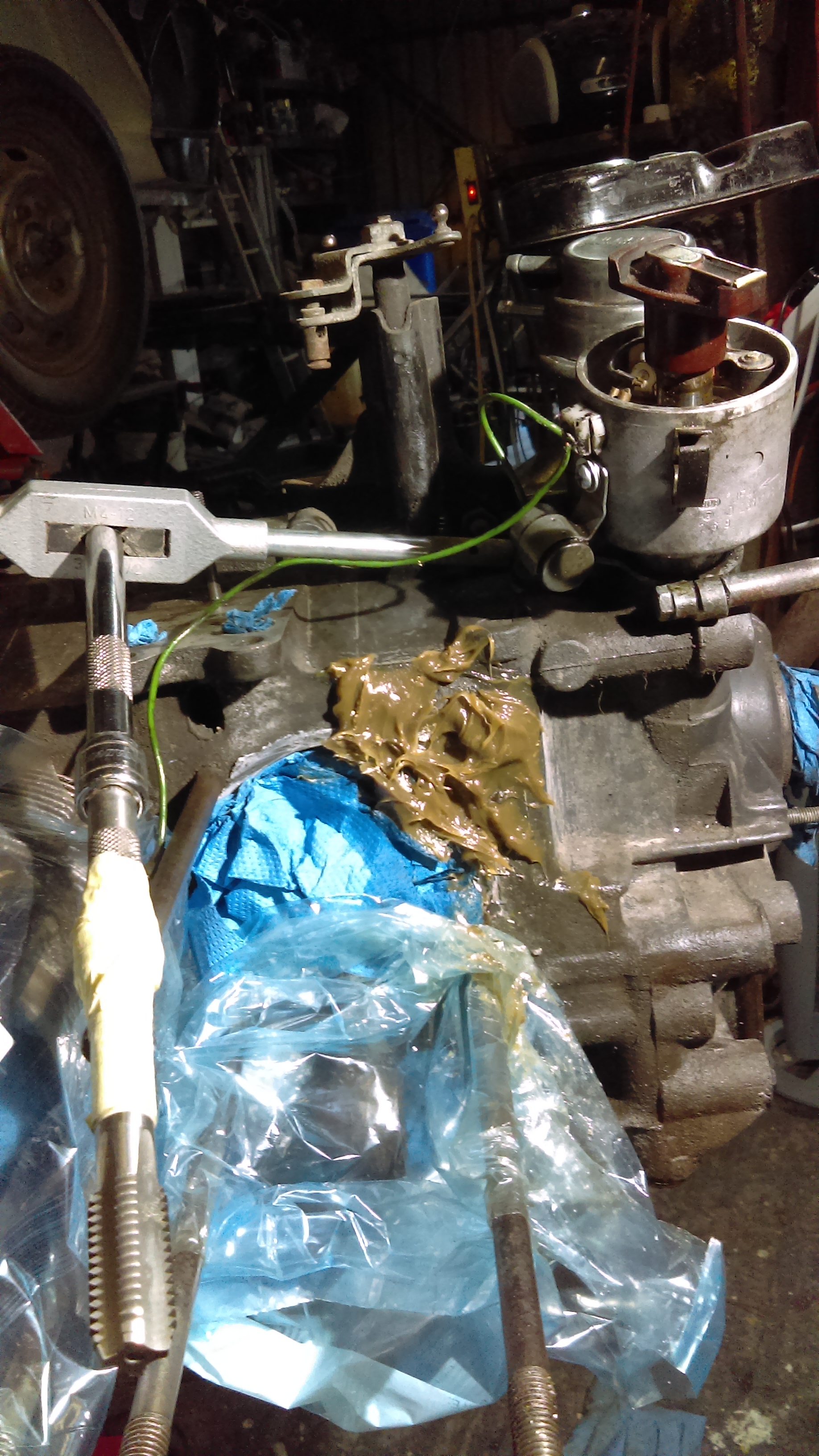 Plenty of grease to catch all the nasty swarf. 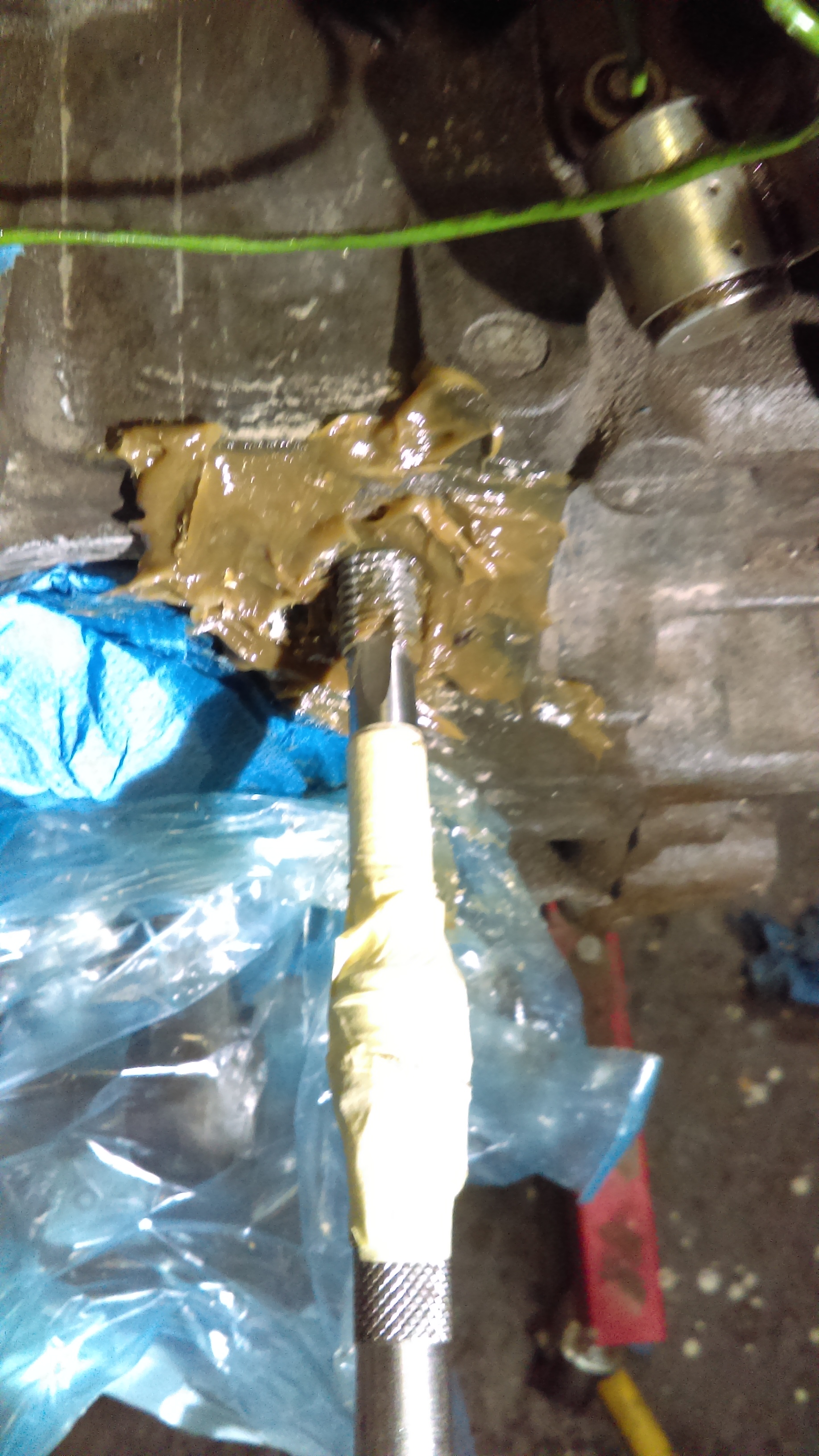 Plenty of grease on the tap to catch more of the swarf. 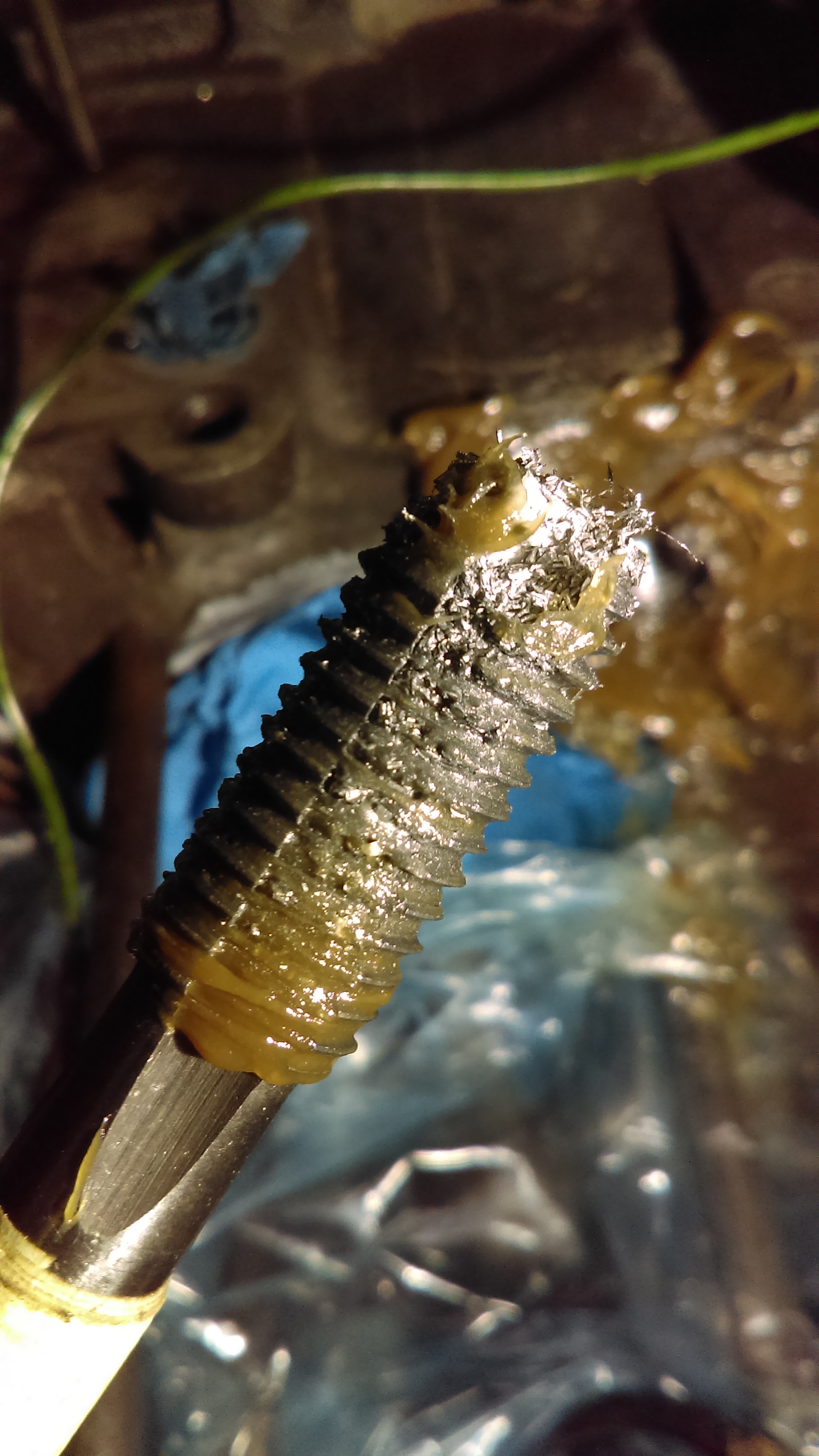 Easily tapped with the right tool, and patience.
Took less than 5 minutes. 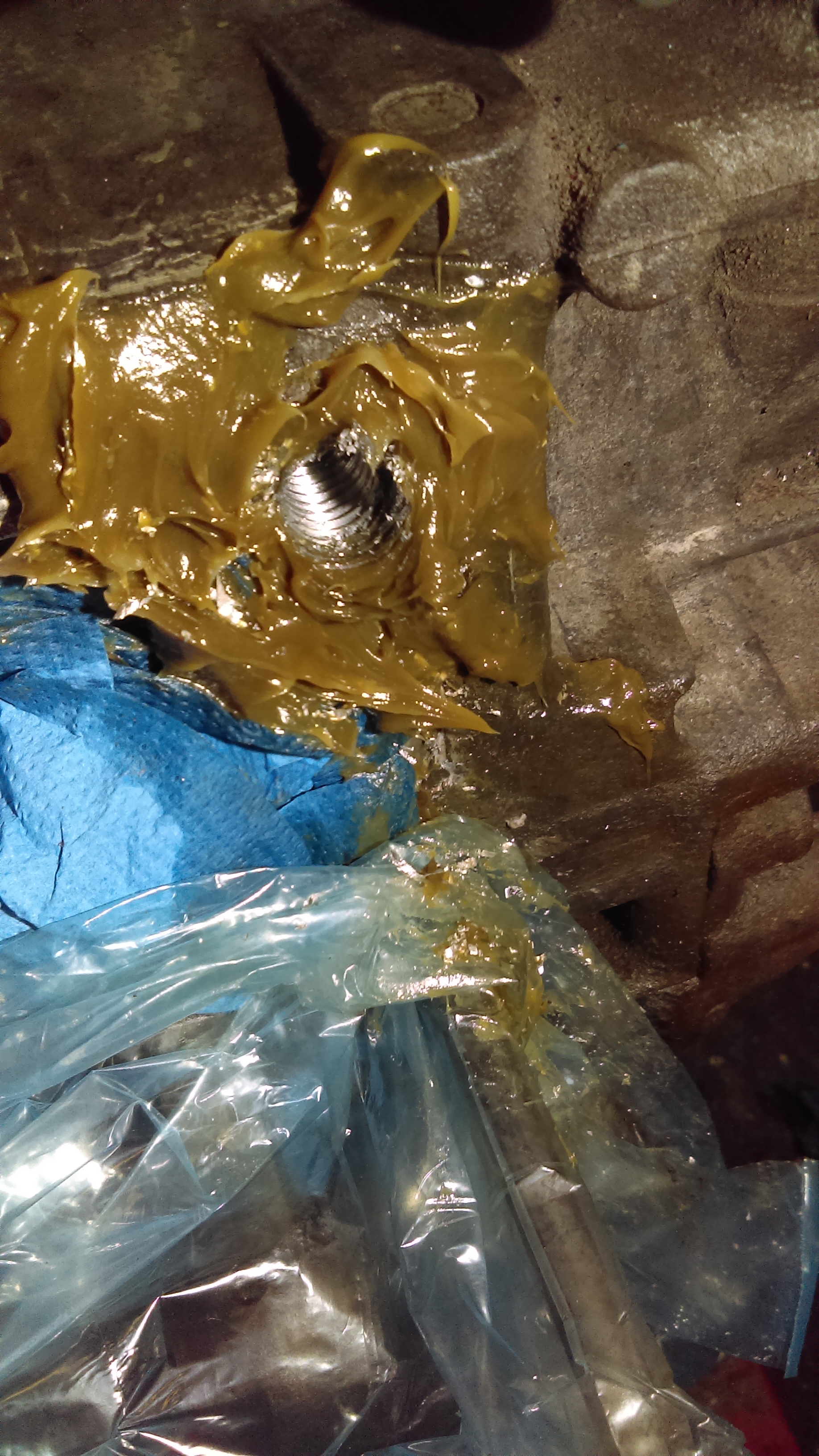 Now just to clean out the last remaining junk,
and give it a blast of brake cleaner, 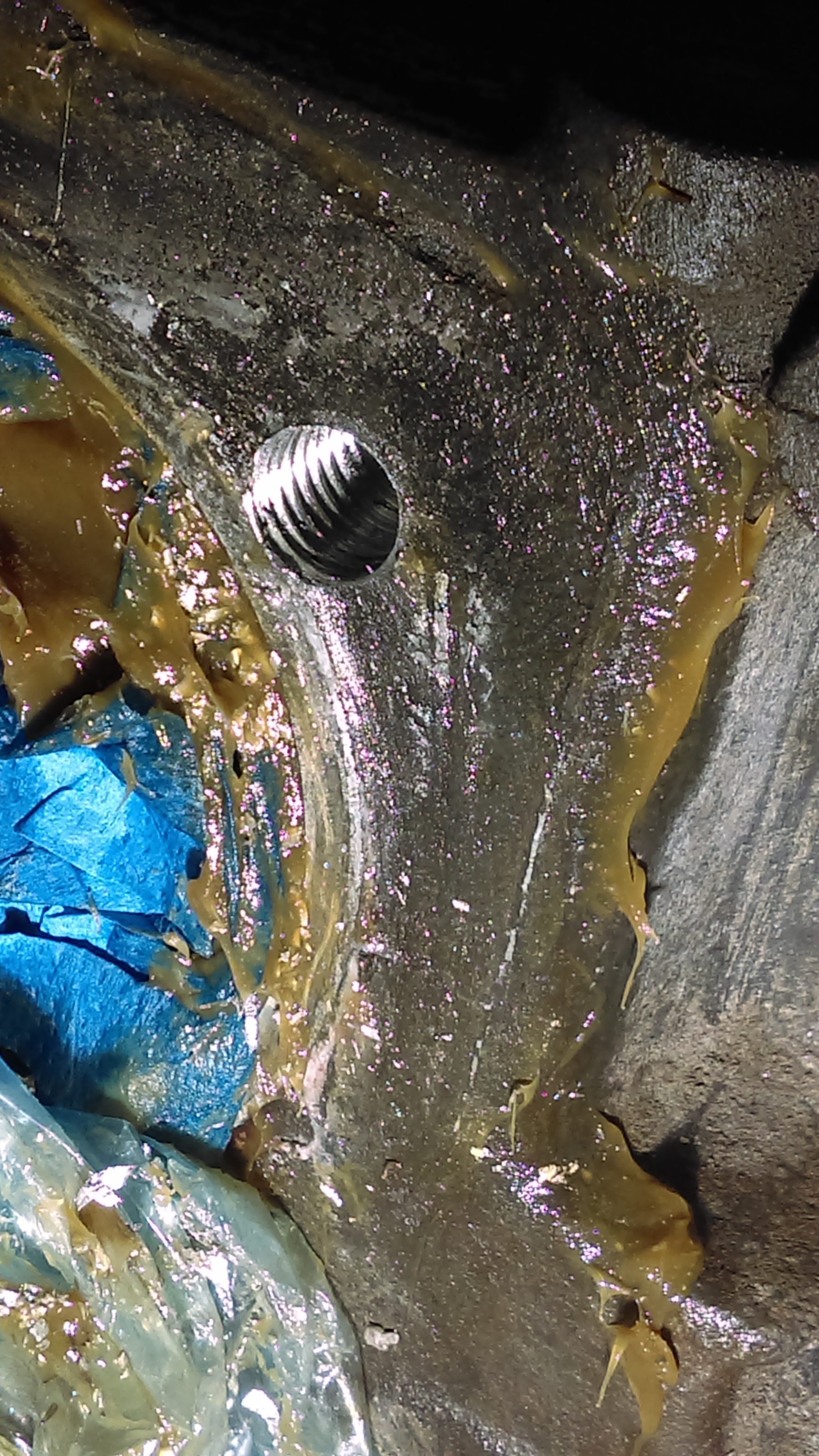 Case saver fitted on to the stud, with a specially chamfered nut to
make sure the case saver insert is pressed nice and close to the face of the case. 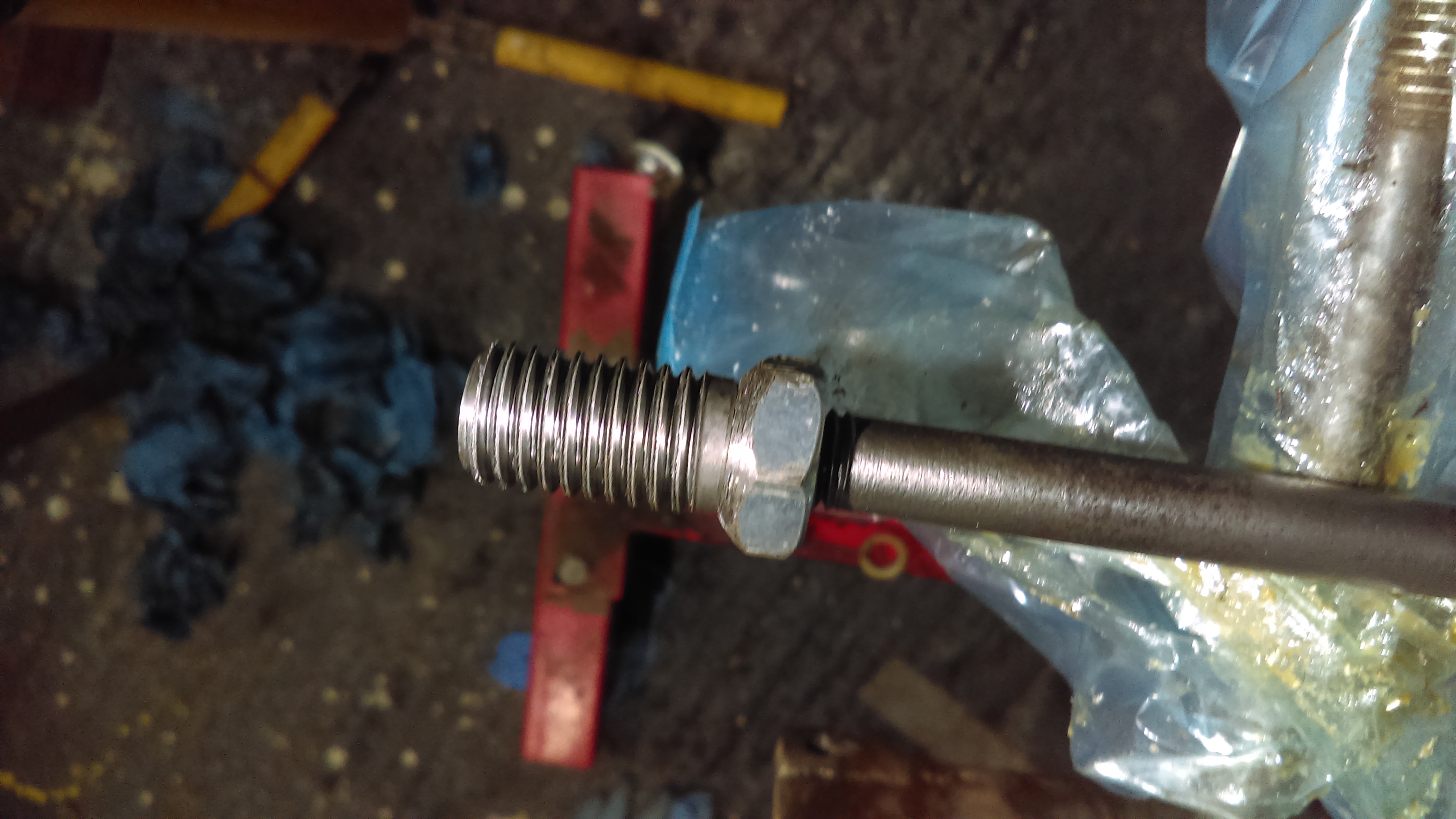 Inserted into place finally, using the appropriate loctite. I could have gone another 1/2
turn, but I didn't want to tempt fate, as it was nice and firm here. 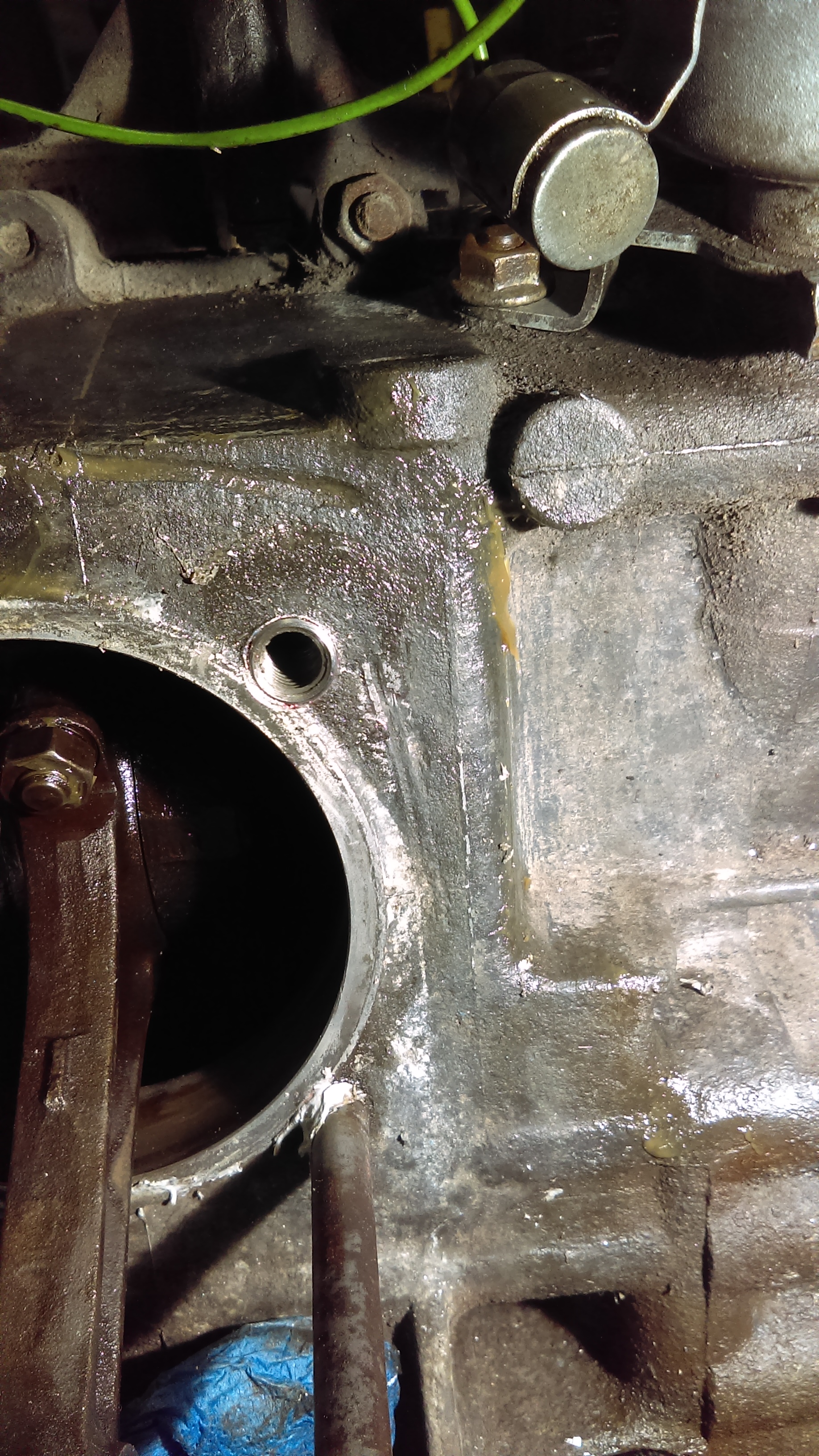 Check on the vertical plane says all seems ok. 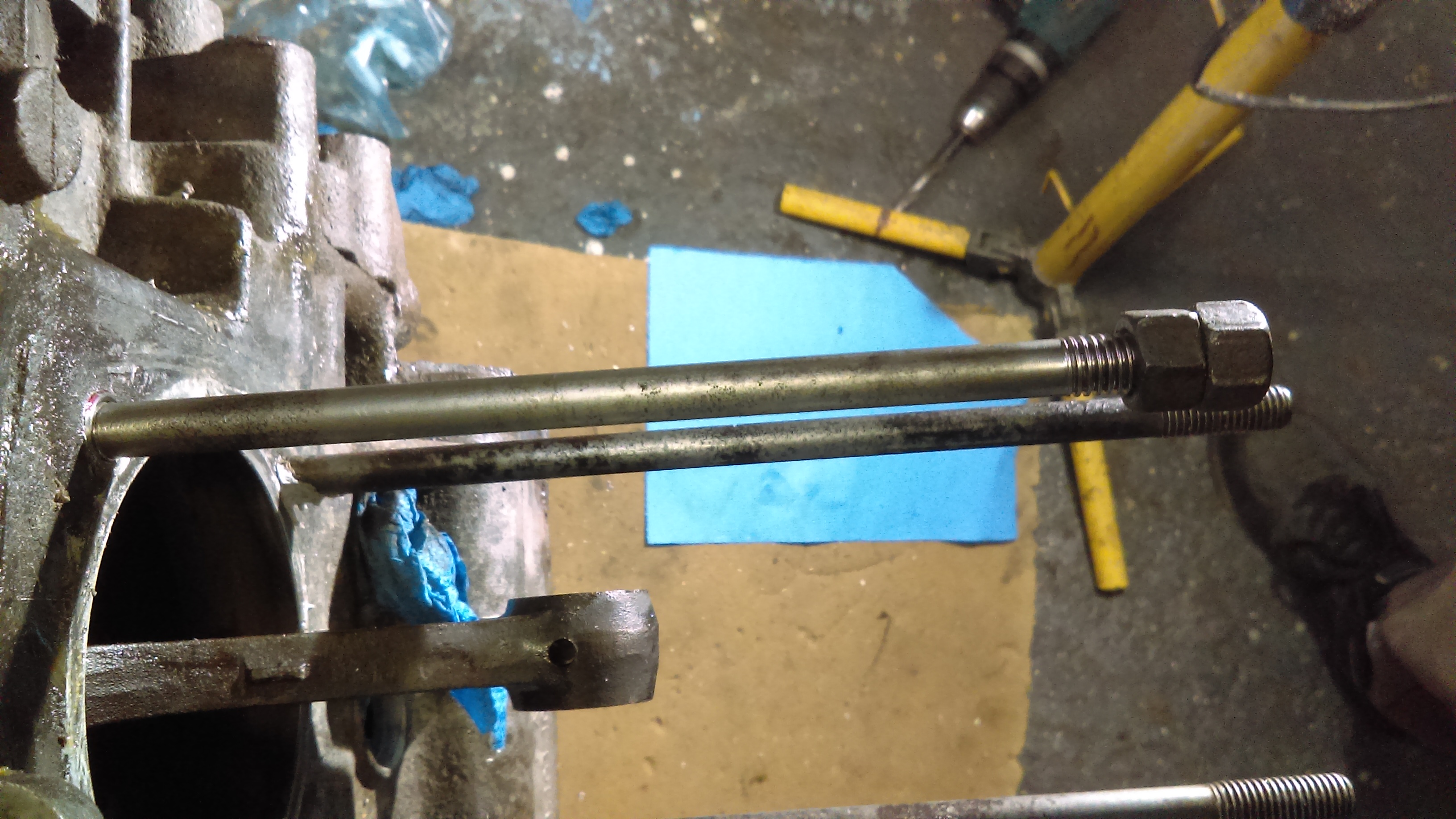 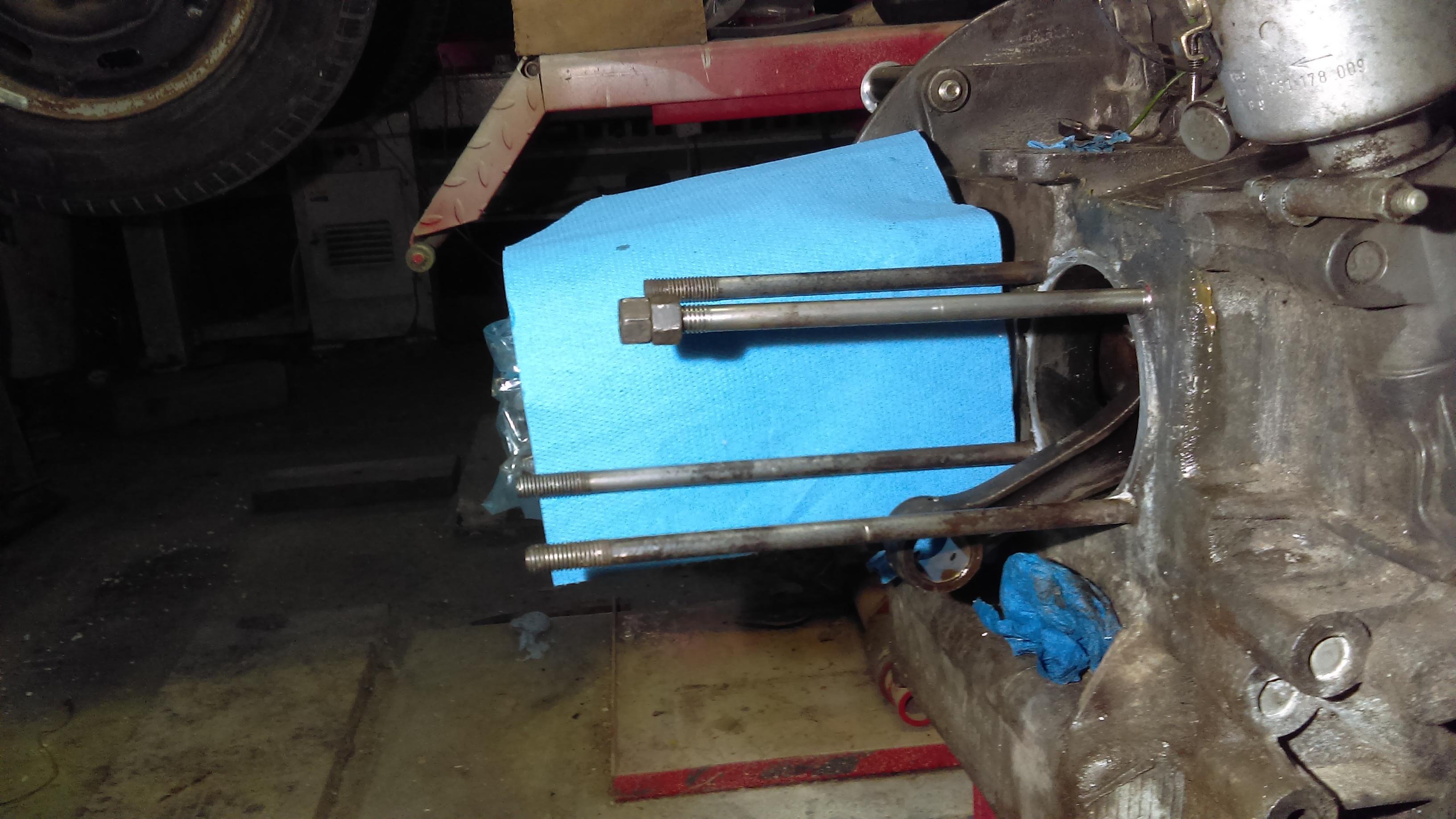 Heads on and torqued up perfectly. So a good result

Excellent work as ever, but your above quote has be baffled. Studs dont have bolts. They have nuts. Studs and bolts are round bars with external threads.

But its nice to see a job done well, with proper thought given to consequences of actions, ie how to stop fixing a thread resulting in swarf entering the block and destroying the engine.
The sultan of swing
Top

Yep, you got me again

I doubt too much could baffle you

I found the empi case savers to be a serious bit of kit
for this type of issue. What with it being a 14 x 2 OD,
its a solid grip into the case.

Coarser pitch = greater resistance to axial force along the stud. (more meat between the threads)

I would say you were given the right choice

I was given the Henry Ford option.

You can have any one, so long as its the one I supply

Engine near ready for installation back into my fasty, 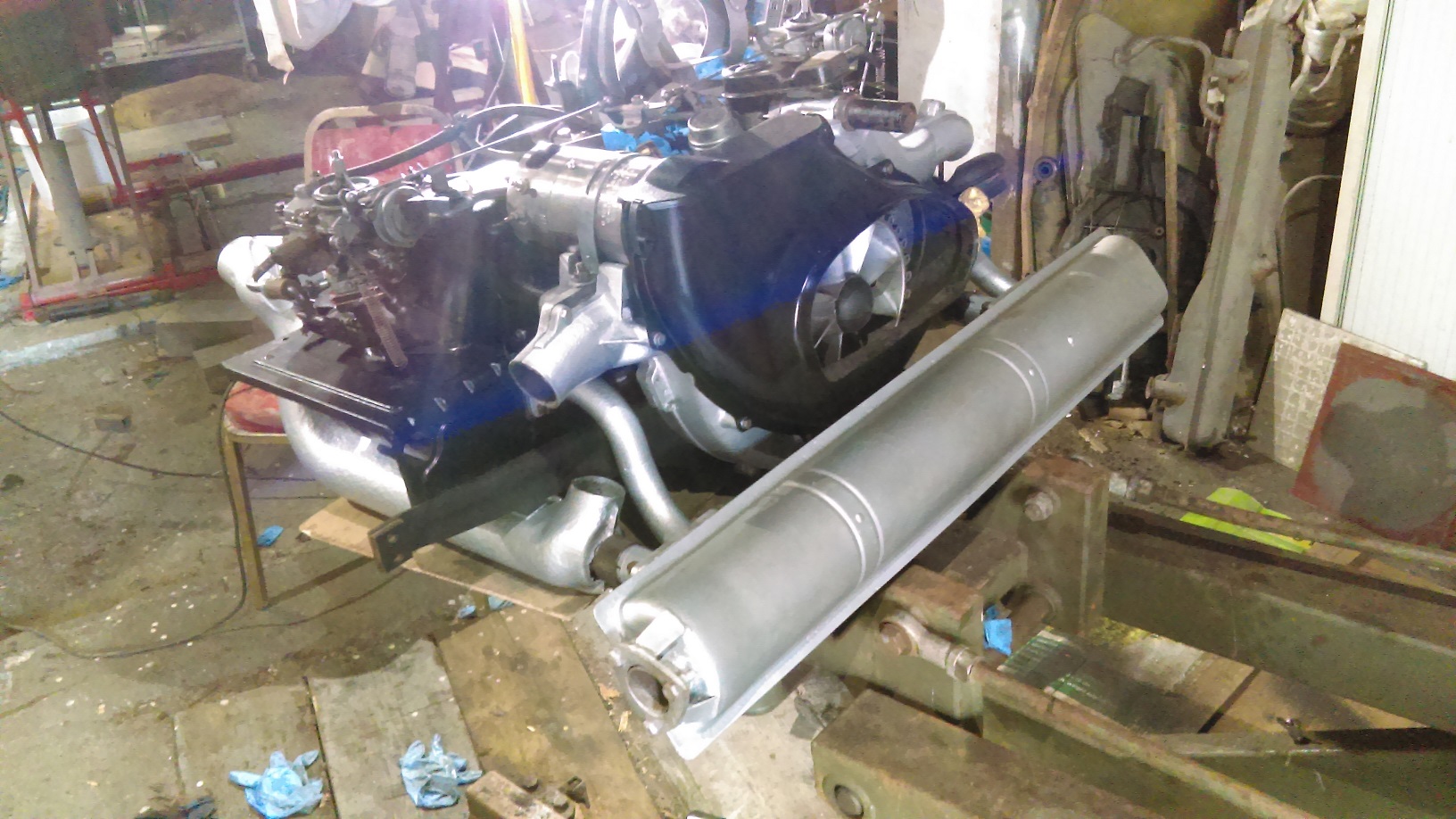 Clutch plate and pressure plate fitted back on. 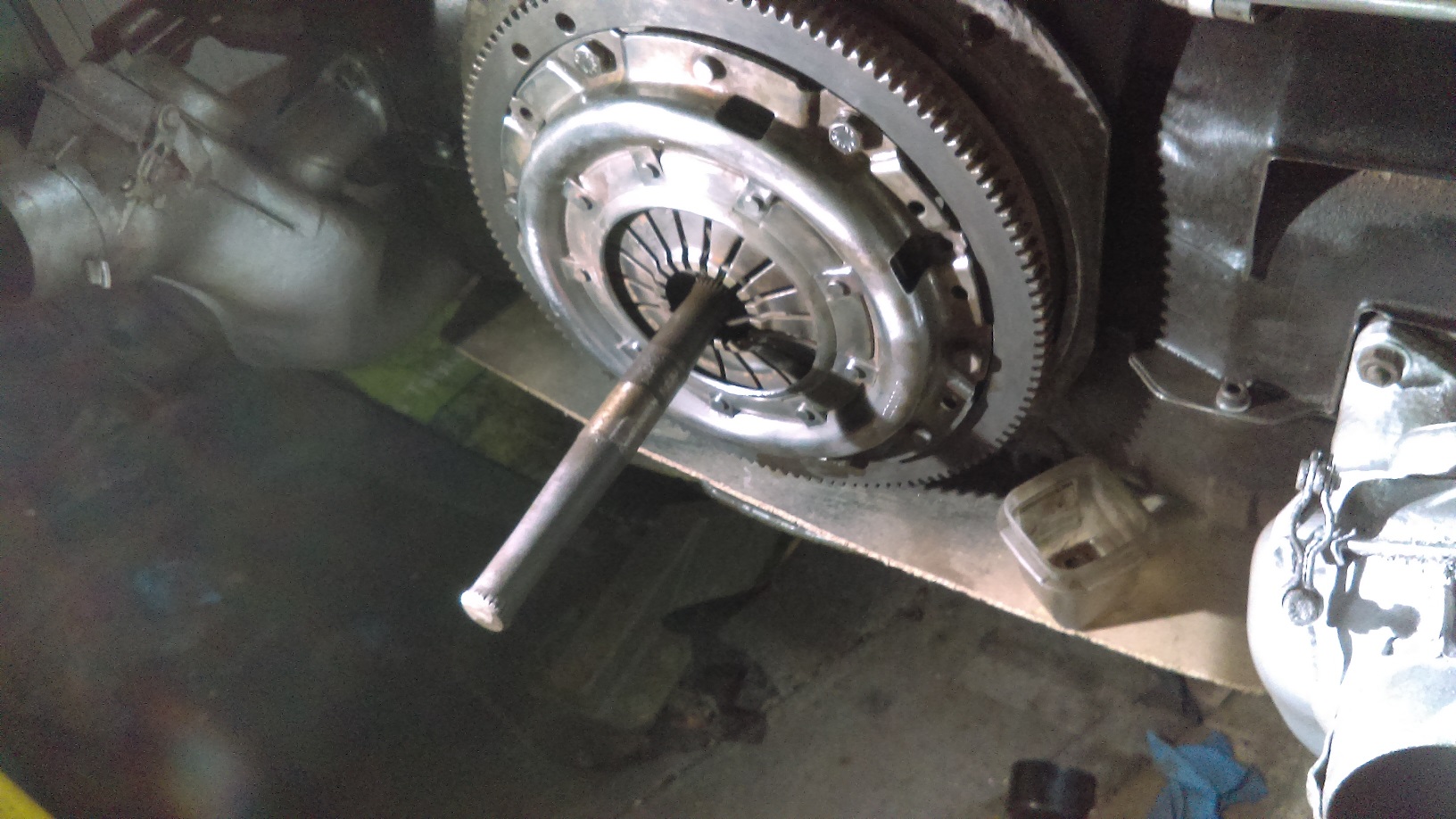 Up onto the forwards weapons loader, as i dont need to fit any ordnance
onto any unarmed tornado aircraft, it doubles up as a perfect engine loader. 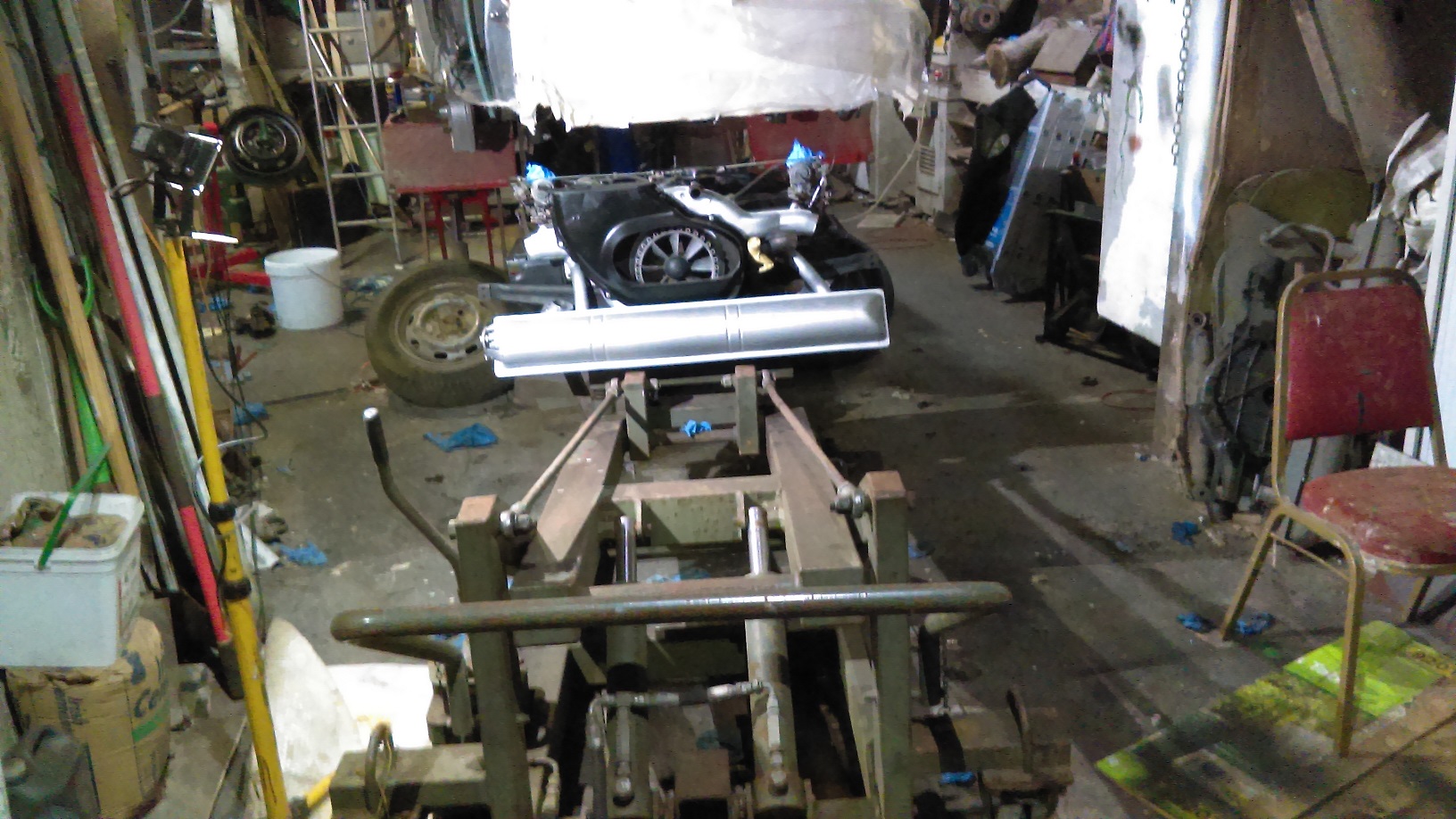 Now as its placed safely back where it should be, wont be long before its Chocks away. 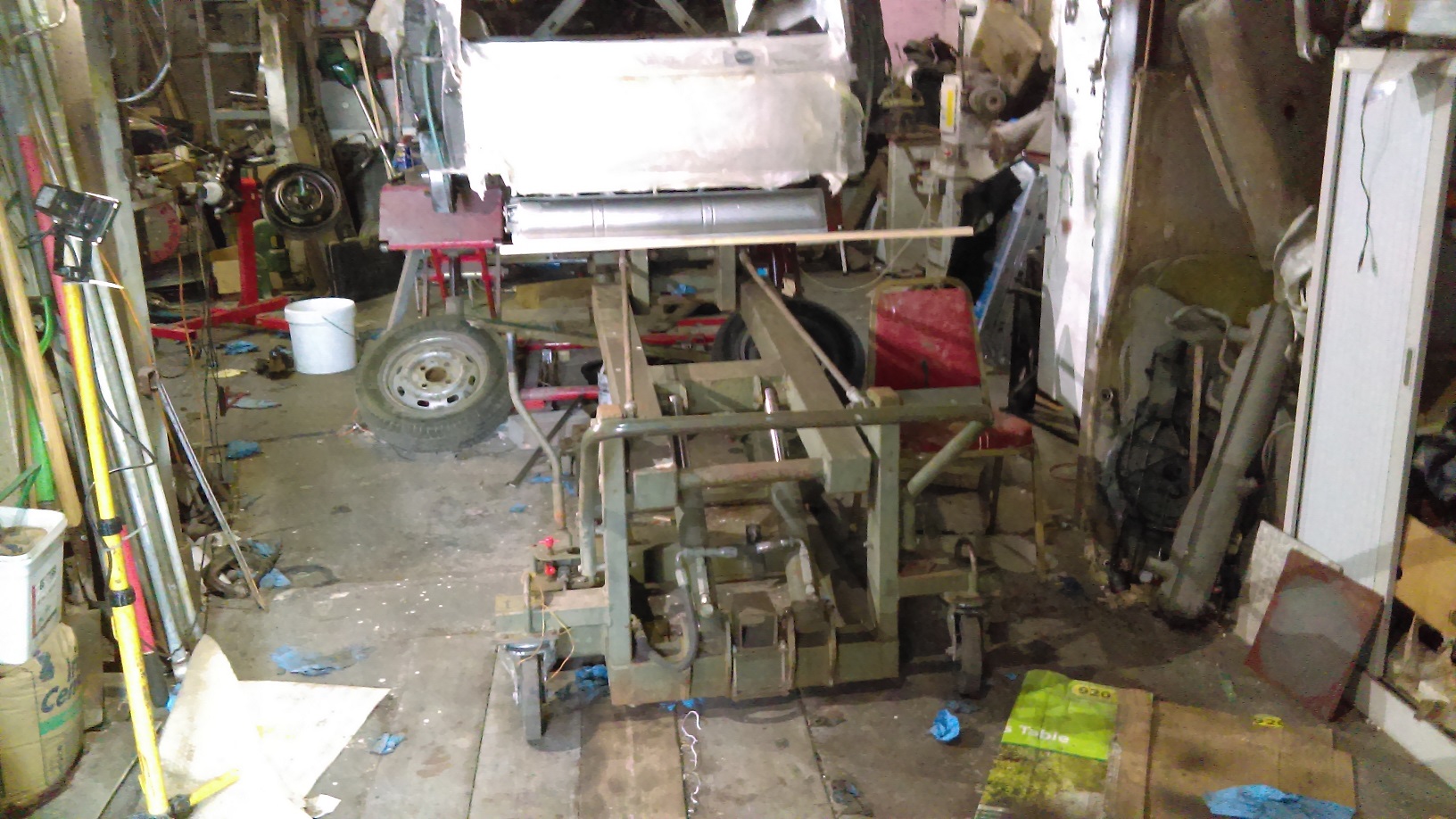 Now thats its in, I can have a good clear up at long last.

Good work as ever! How are you connecting the fan to the heat exchangers? I see you've got one of the aftermarket standard exhaust things. Id always wondered what they looked like
The sultan of swing
Top

I picked up this exhaust very cheaply from a guy who was having a shed clearout,
and did not know exactly what he had. Sounds great, and is a heavy bit of kit.
I am thinking of steel universal flexible piping. But I,ll cross that bridge when I come to it

Also picked up 2 genuine VW NOS exhausts ( see one in the pic ) from another chap clearing
out a load of Type 3 bits. So exhaust choice is plentiful.
http://s1093.photobucket.com/user/beetl ... t=3&page=1
Top

You learn something every day.

I had to change the oil inlet pipe on the engine I was fitting,
from the previous engine. I never knew there was any difference.

But the pipe that was on the engine was way out of line with the oil filler cap.
And the original pipe fitted perfect.

The two are clearly different. Was there a change between the early filler
pipes, and the later one's. Any way, all in line now.

Firing up time very soon. Countdown is on.

There are many many different oil filler pipes and angles, ghia, t34 various type 3. some with return drains, some with out. I was about to quote the same article!
The sultan of swing
Top
Post Reply
360 posts