Some good news soon arrived, my Porsche Teledials came back from the painters. Fully dipped and stripped, fully powder coated silver then the centre painted bright red and then finished off with lacquer.

Very happy with them. Looking forward to seeing them when the car is on the ground off the axle stands. 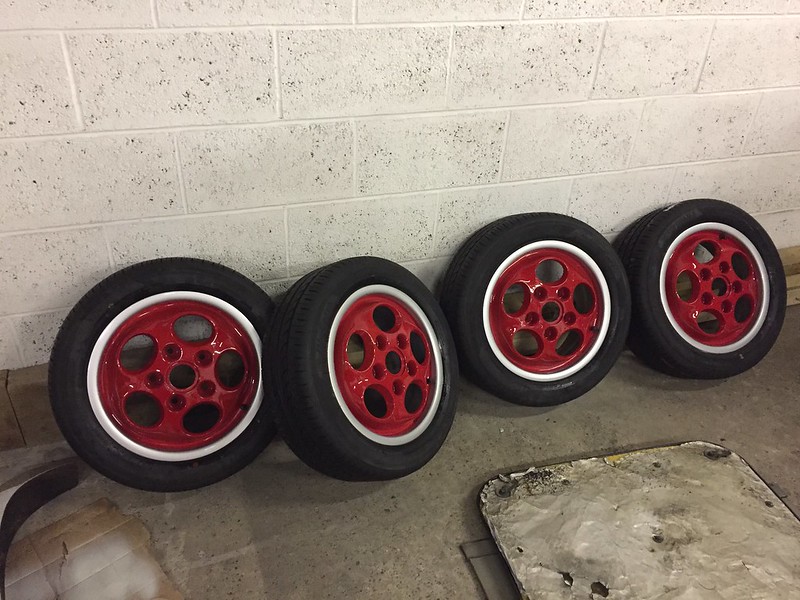 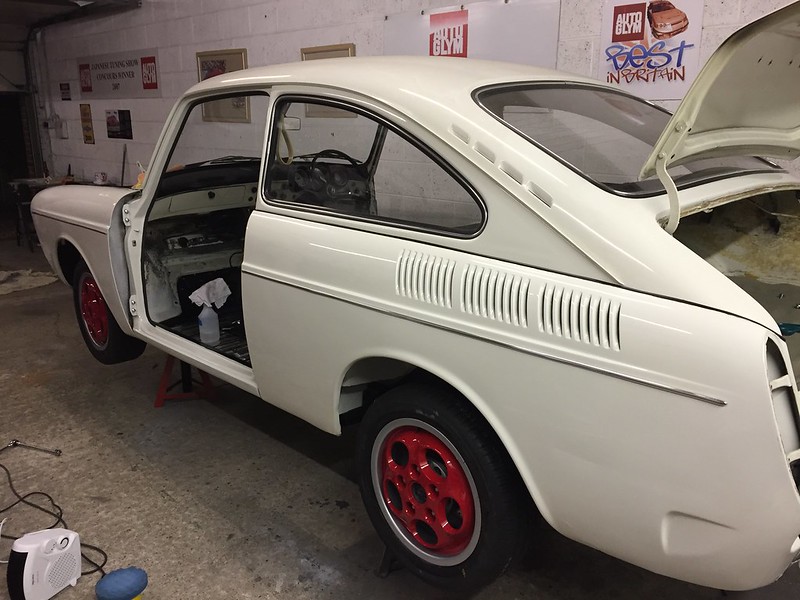 It has taken every night this week to fit the wings. The beading has been a swine. Help again from the wifey and they are all now on, with exception to a couple of bolts.

Whilst the lights and bumpers are not fitted yet I've taken the opportunity to machine polish all the wings as I fitted them. I also polished up some of the newly painted bits and the front and rear valances. All came up pretty well, so everything is nice and shiny. The body will need a re-spray at some point as the original beading cracked and pulled a lot of the paint off which hasn't been hidden by the new beading. That will be phase 2 in a year or 2.

Also got some wheels spacers on order and got them fitted.
1971 VW Type 3 1600 TE Fastback. Body off Resto completed, now just bits and pieces and niff naff to do.
Volksworld Magazine featured car 2013
Instagram: @type3.fastback
Top

Absolutely gutted today as we started the engine for the first time and the oil cooler p£££$d oil everywhere.

On a positive note, the engine did start. It'll need the timing setting but all good.

Managed to strip out the tinware in situ and I'm trying to figure out how to fix this.

In the scheme of things considering what you have accomplished so far, its a minor glitch.

Wow this has come one quickly! I bet it hasnt felt it for you but thats very slick looking and well together sir!
The sultan of swing
Top

OMG I am SO pleased to see KBY217K in such great order! This was our much loved family car bought new for my Mum when we were kids! We had many happy hours in this car. I would clean her every Saturday to earn my pocket money! I know this car so well and my older sister had it and kept it going for many many years. So pleased! What an amazing job you have done! Please keep me posted
Top

Last post is magic , it doesn,t get any better for a fasty restorer...

WOW great to here from the original owner. I still have the original sale receipt too. Hope you approve of what I'm doing with the car.

It's proving a stubborn SOAB though and doesn't seem to want to be put back on the road. Hopefully it won't be long until it is though.
1971 VW Type 3 1600 TE Fastback. Body off Resto completed, now just bits and pieces and niff naff to do.
Volksworld Magazine featured car 2013
Instagram: @type3.fastback
Top

Ok, so after some set backs with various things. Particularly the brake fluid leak from the master cylinder, I decided in my wisdom to spend even more money on the car.
So I've bought an ISP tachymeter from Fabrik Mike, a second battery and voltage sensing split charge kit and an Air ride performance V2 kit with Monroe air shocks for the front. Oh and a 12V gauge to keep an eye on things.
Air ride is to enable me to get up the drive as it is a little steep and doesn't like lowered cars.

The split charge system is to help with the air ride and compressor and also to provide power to a future amp for a stereo that I hope to fit in a year or so.
1971 VW Type 3 1600 TE Fastback. Body off Resto completed, now just bits and pieces and niff naff to do.
Volksworld Magazine featured car 2013
Instagram: @type3.fastback
Top

So, first off a few weeks when there was a day that was above freezing I fitted the Tachometer. First I removed the non functioning clock, which was easy enough.
I then ran 2 new wires to the coil. Didn't take long to do.

Engine started and it worked a treat, does a nice full sweep on start up. 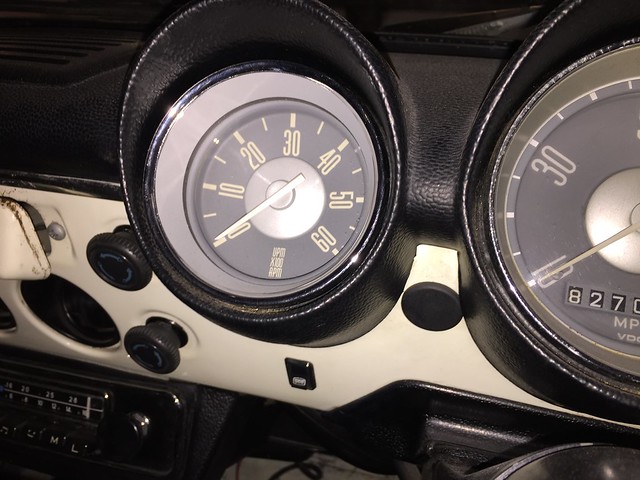 Next I bough and fitted a second battery and then fitted a Durite volt sensing relay which turns on at 13.3V and off at 12.65V. 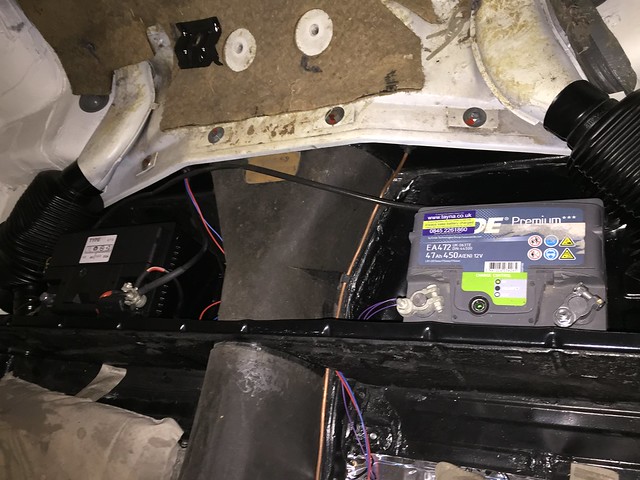 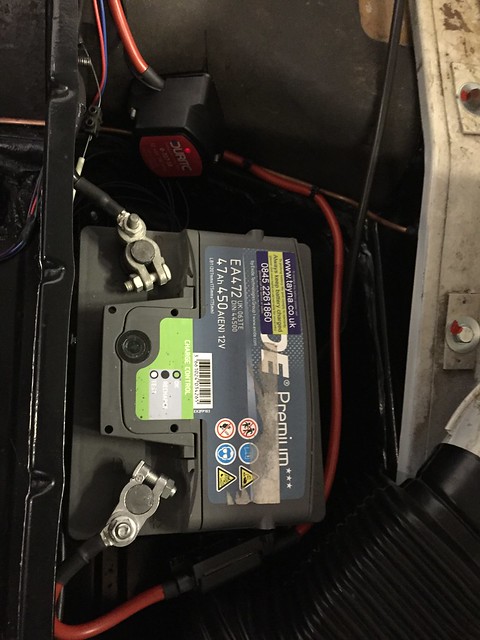 A bit of forward thinking and the idea that I'd like to put a decent stereo system in at some point. I have a lot of high end cables from previous show cars and a Hertz HP5 amp to fit, might as well put them to some use.

I ran a load of audison RCA cables from front to back, plus added a few spare wires too for amp switch on etc. Don't want to be pulling the carpet up to many times when it finally gets fitted. 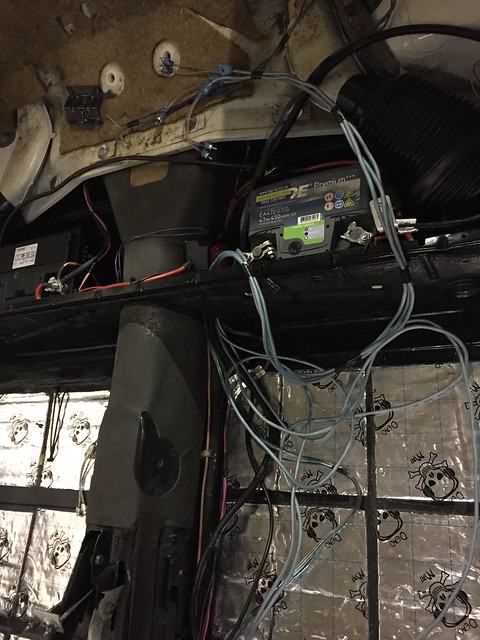 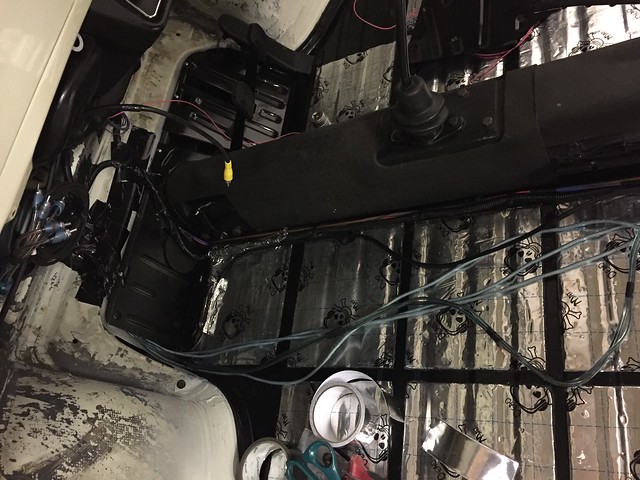 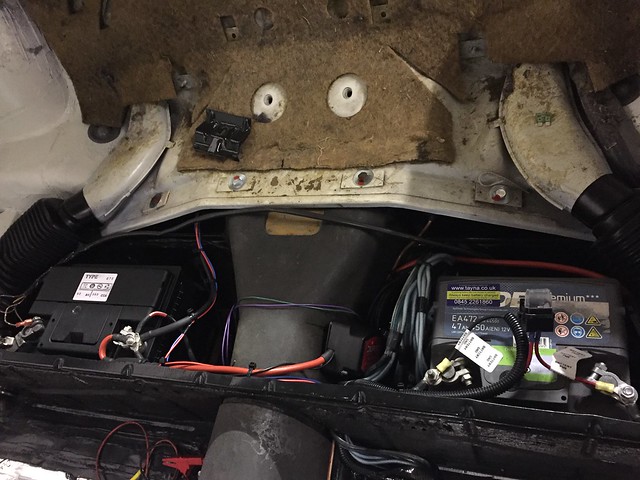 Last job I've done is run the air performance V2 air ride loom through the bulkhead and connected it up to the battery.

I also temporarily fitted the ECU manifold , tank and compressor and tested that it all worked ok.

Test run was good, all be it the thing leaked like a sieve as I hadn't fully tightened or seal the connections.

All good though, fingers crossed it'll work again when it's fully fitted.

Only down side to the test fit is that the air shock height seemed longer than the normal shock that came off and in doing so raised the car by about 25mm, so I'm going to have to re-fit the original dropped spindles and take off the standard spindles and will probably have to take the beam from the low position to high to get the ride height I need. 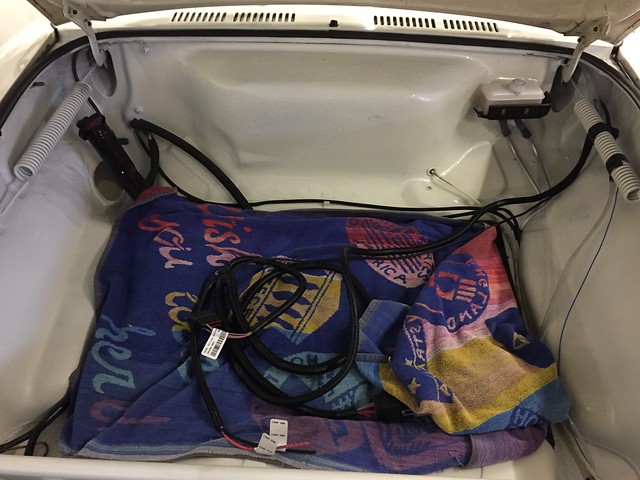 Liking the twin battery idea! Had always wondered about it for when im camping. Run my inverter off the spare without hurting the main one, still might do it but I recently bought this

It fits in my pocket and it cant actually crank a stock engine over. Not fast enough to start it. But if it was just a weak battery then it would certainly make the difference so im temped to live dangerously and rely on that booster pack. I really am very impressed with it.

Im not at all jealous

and dont hate you or anything! I very much wouldnt mind one of these when the cars done
The sultan of swing
Top

After getting over the disappointment of my failed brakes. I've picked myself up and hopefully focused to get the car on the road, albeit 6 months later than planned.

So I've removed the CSP master cylinder and returned it back for invesitgation. In the mean time I've ordered a new one and am waiting on it it's imminent delivery. 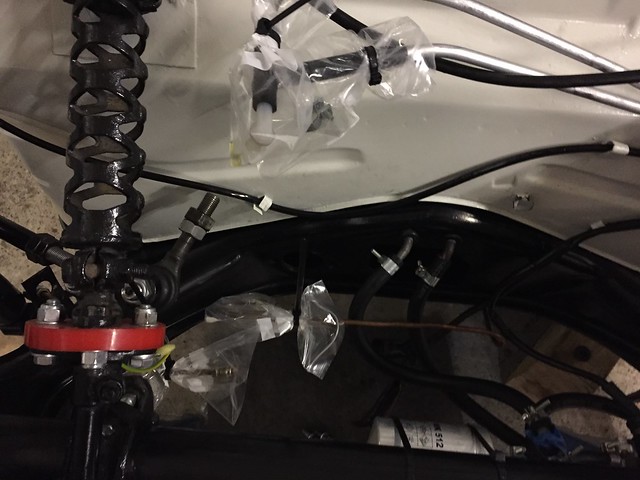 Over the last few weeks I've been trying to sort my front air ride suspension. It seems that when I fitted the Monroe airmax shocks to the standard spindles and with the beam at it's lowest setting, the compressed length of the shocks actually increased the ride height

Fortunately I actually bought the car with drop spindles fitted, and during the restoration opted to put standard spindles back on. So all i needed to do was dig them out, clean and paint them up and fit them.

Unfortunately removing the discs of the standard spindles meant I damaged the inner bearing on both sides trying to get it off the spindle.

So I had to buy x2 new inner bearings.
And also as there is a bump stop adaptors fitted, it meant that my ball joint splitter wouldn't fit

so I had to wack them off with a ball joint splitter fork. x2 split tie rod botos later they are off. So I now have to replace the brand new boots for brand new boots. 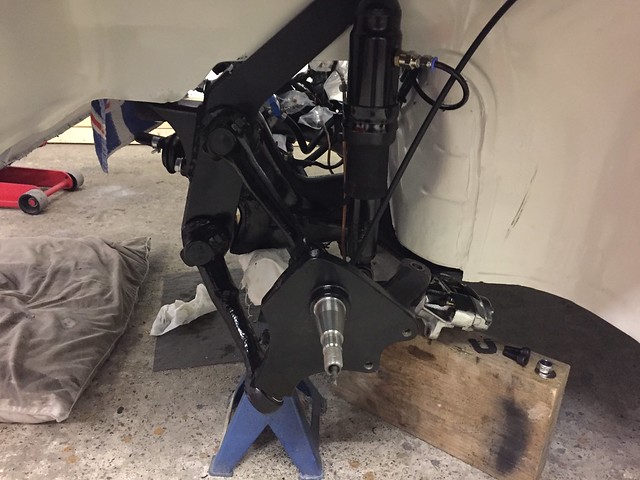 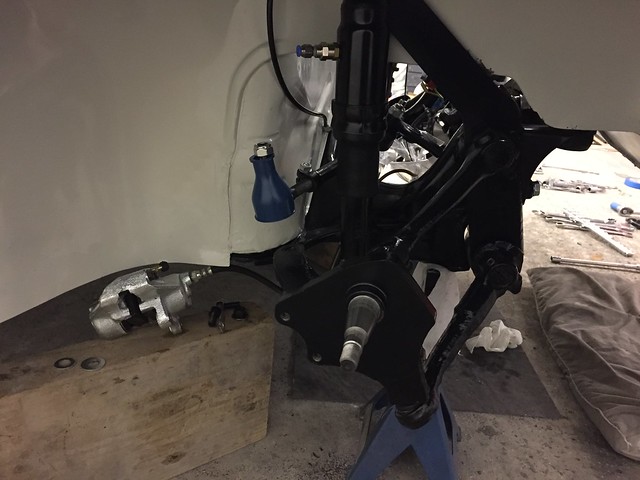 Compressor, tank and air ride performance fitted to some 12mm ply cut to shape. Hopefully, going to try and get my hands on some german square weave carpet to try and fit on top.

How easy/hard is it to hand stitch cloth edge to carpet? 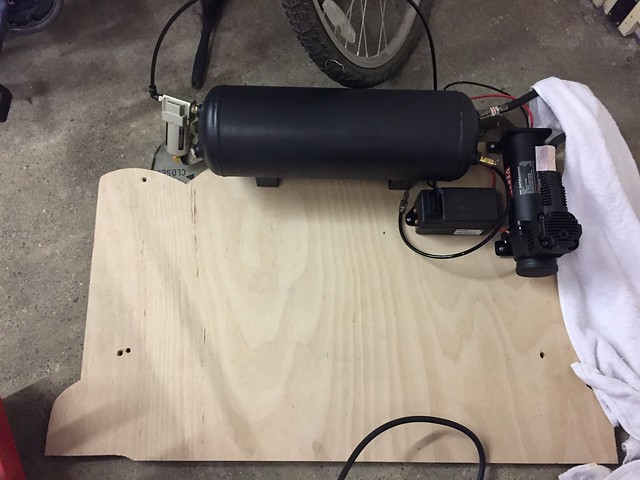 Having fitted the dropped spindles, I noticed that there was only a 20mm difference in height between fully deflated and fully inflated.

I was certainly hoping for a larger lower/raise height than that.

I popped a jack underneath the lower arm and managed only 20mm movement in the arm. So having spent a fortune on the air ride, it would appear that the narrowed adjustable beam I have fitted isn't up to the job for air ride.

A quick messenger chat with the guy in Germany who's been helping me with the air ride, suggested to remove the aluminium block on the sway-a-way adjusters.

After studying the adjusters, I decided to cut out the lower nut and reverse it so that the adjuster had more travel down. 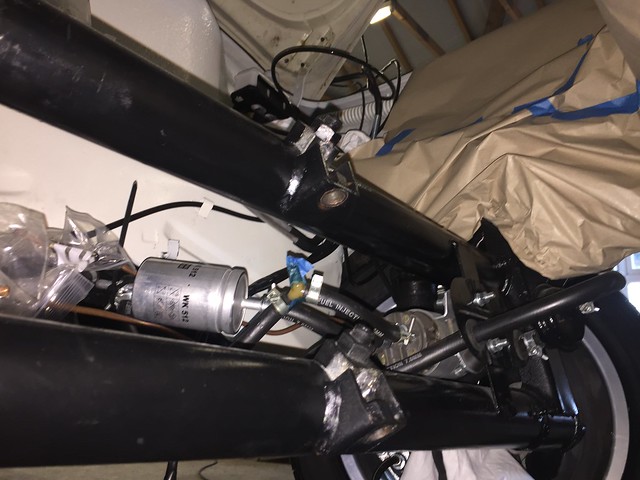 So I took the plunge, with the beam in-situ and cut and welded them back in. 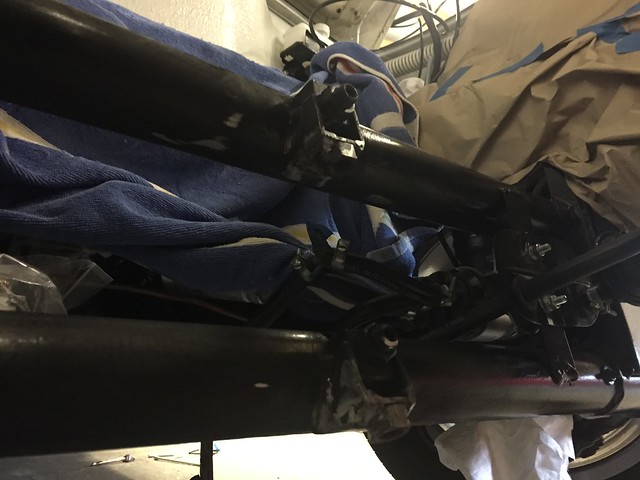 I've cleaned it up and then had to repaint the beam. All nice and clean again 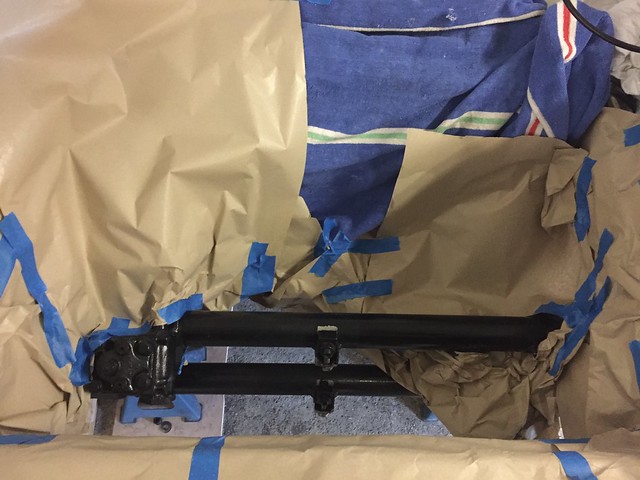 By doing this I've gained a further 30mm drop.

The shocks normal compressed length is 9.5", as the beam is at it's lowest I can only get the shock to compress to 11.5". Fully extended 14".

I'm happy with it at the moment, I'm hoping it raises high enough to get up and down my drive. Maybe at some point when I can upgrade the beam to get the car slammed on the floor. 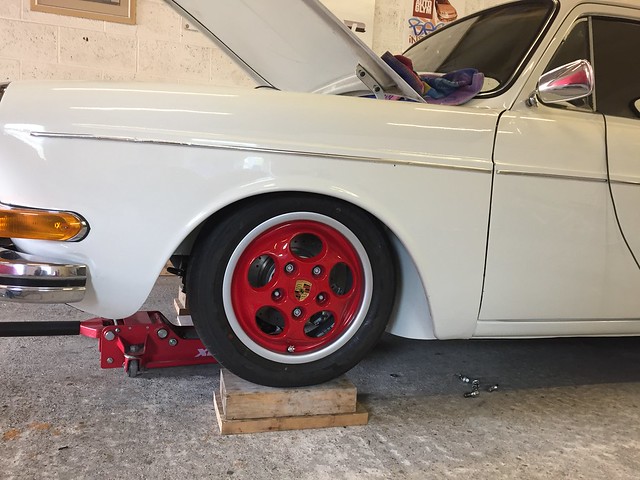 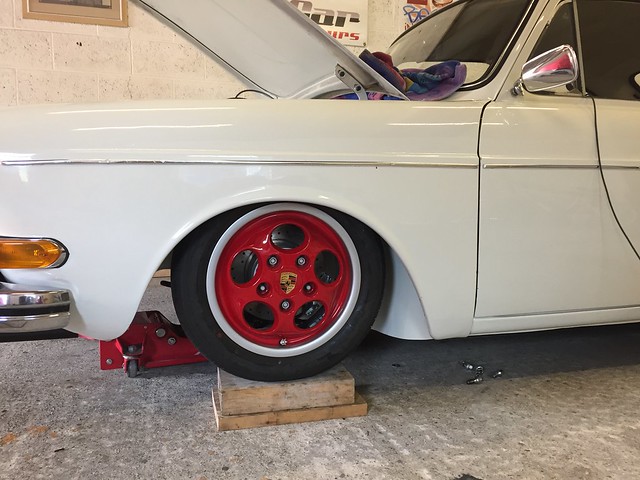 This weekend I tackled the lower portions of each wing, as they had had previous repair work on them and had been painted black. They stood out like a sore thumb. And as I am having issues getting the alignment perfect, I thought fixing this would help some.

So masked off, sanded back and re-painted. The paint is slightly off in shade, but I'm not that fussed, it's blended in ok and I've machine polished it and looks fine for now. 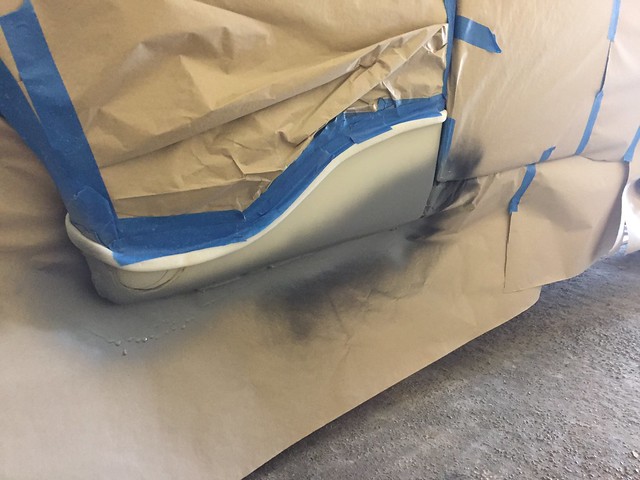 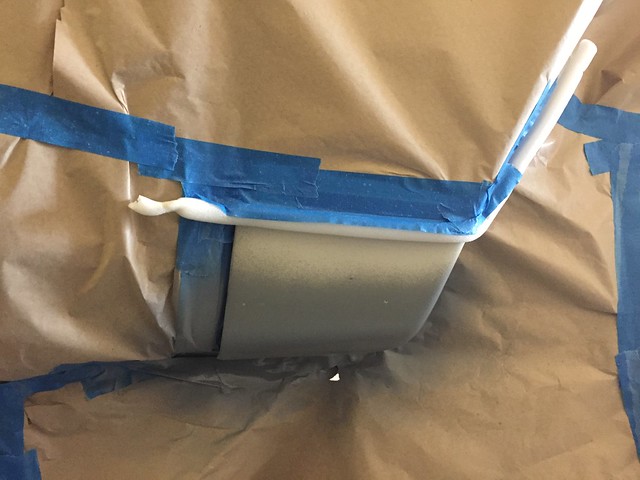 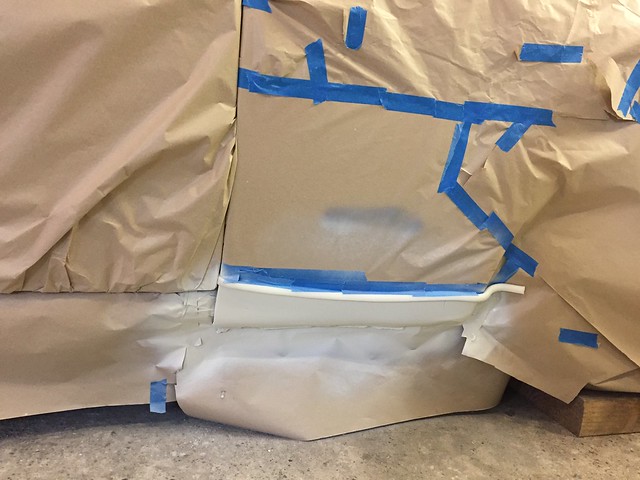 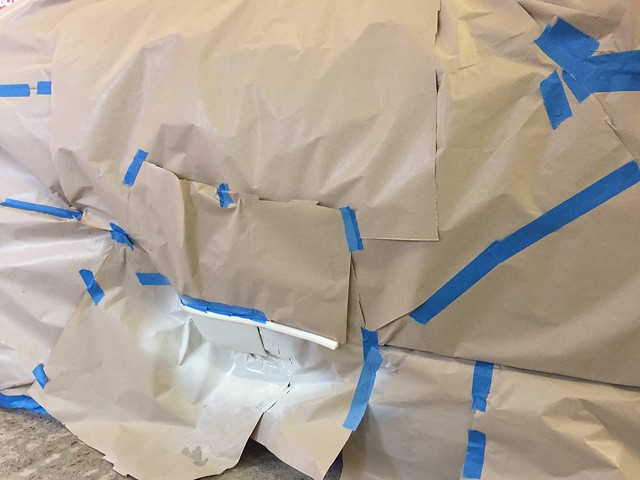 More top work, glad you got somewhere with the beam! I must say i thought your inflated shot was the lowered shot though haha
The sultan of swing
Top

So after some wonderful customer service from Machine 7, I got a full refund on the original master cylinder.

Unfortunately when I fitted the new master cylinder, after a bench bleed and all 4 calipers bled, the master cylinder failed by leaking brake fluid out of a vent hole.

After more great communication with Machine 7, we could not get to the bottom of it, and CSP recon the 2nd one has failed internally again.

So they are going to send a 3rd one out for me to try.

So to get over my disappointment, I started to fit my carpet that I got from Fabrik Mike last October. (It was supposed to be fitted then to ready for the car going on the road).

It's German narrow weave ( a bit cheaper than squareweave). It's a little thicker so I assume is slightly more challenging to fit.

I've only decided to fit the side and back pieces for now, as I want to be able to have access to the brake pedal assembly.

With the help of some high temperature compact adhesive, successfully fitted the carpet pieces with no real problem. 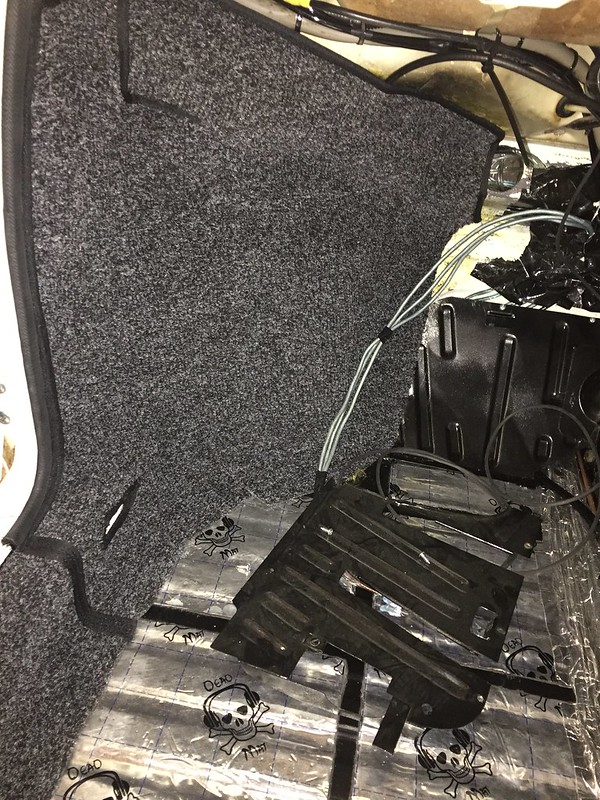 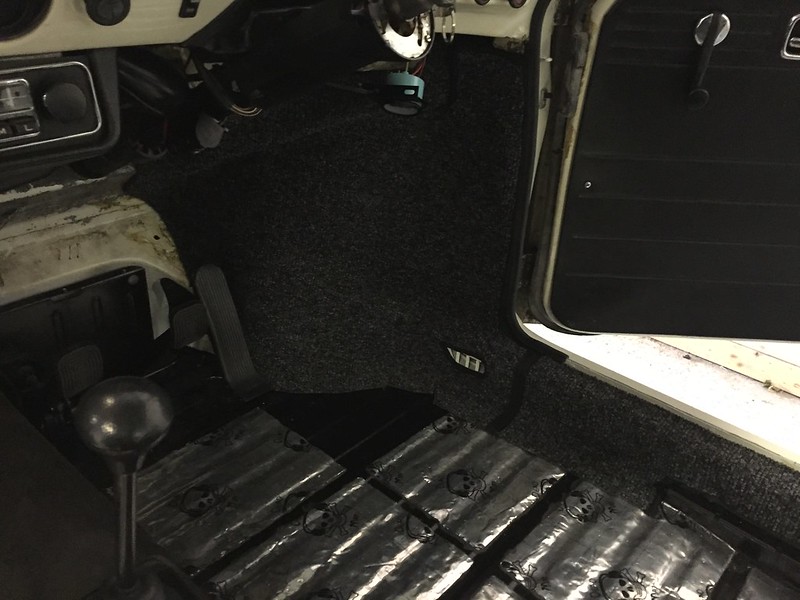 I was desperate to get the back seat in. so I scrubbed it clean (and the front seats) but wasn't happy with the condition.
They still appeared dirty with the odd stain and were quite faded.

So i bought some black dye (Autobrite Direct) and applied it to the front and back seats.

Not sure if you can see the difference with before and after: 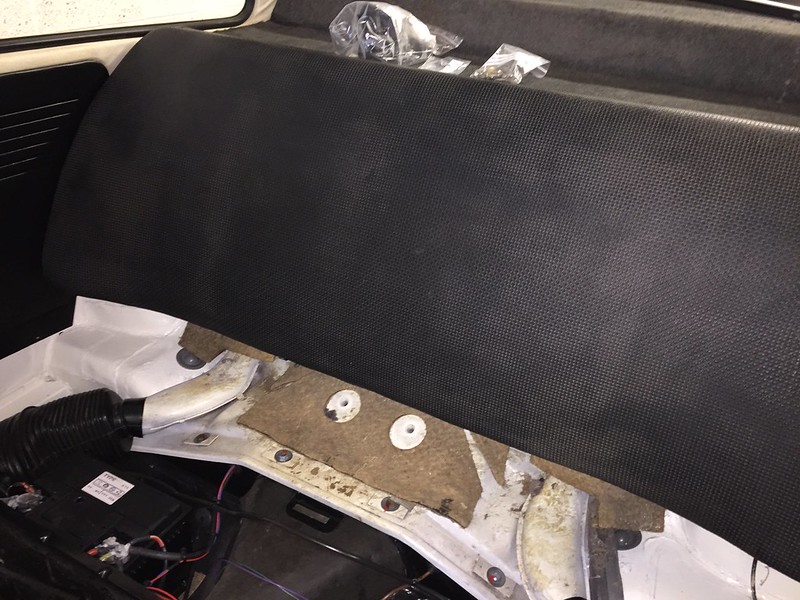 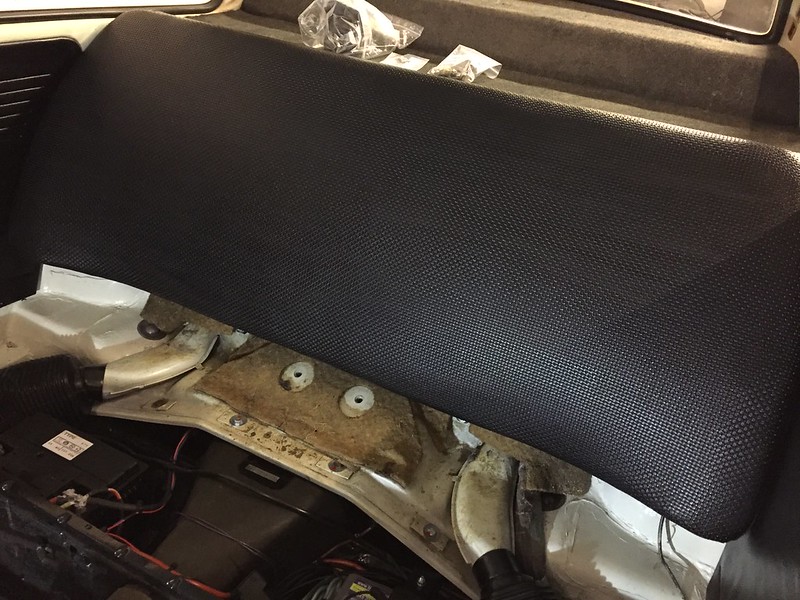 Forgot to take a before pic, so this is it after dye applied: 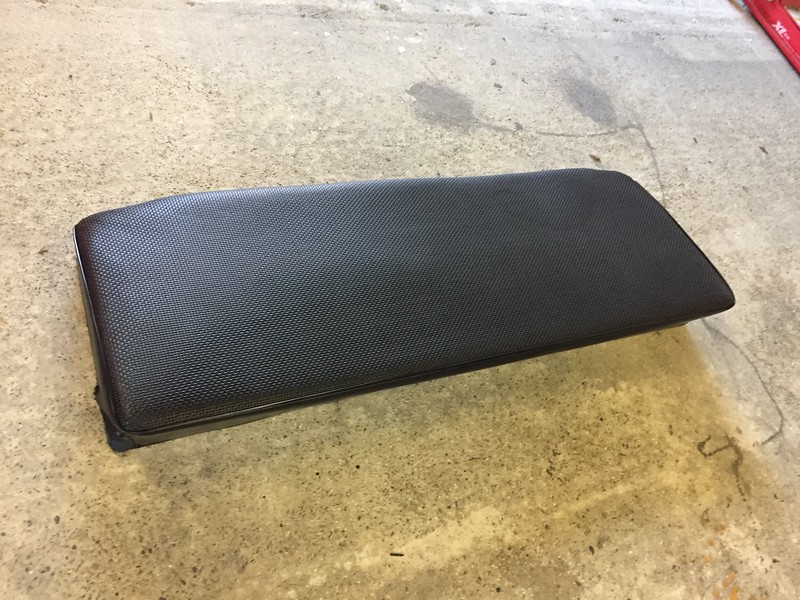 And this is one of the front seats; 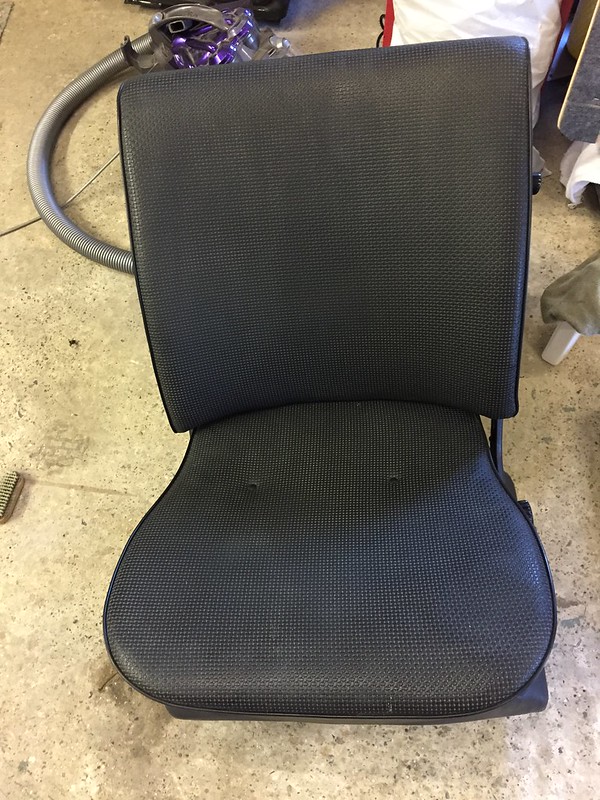 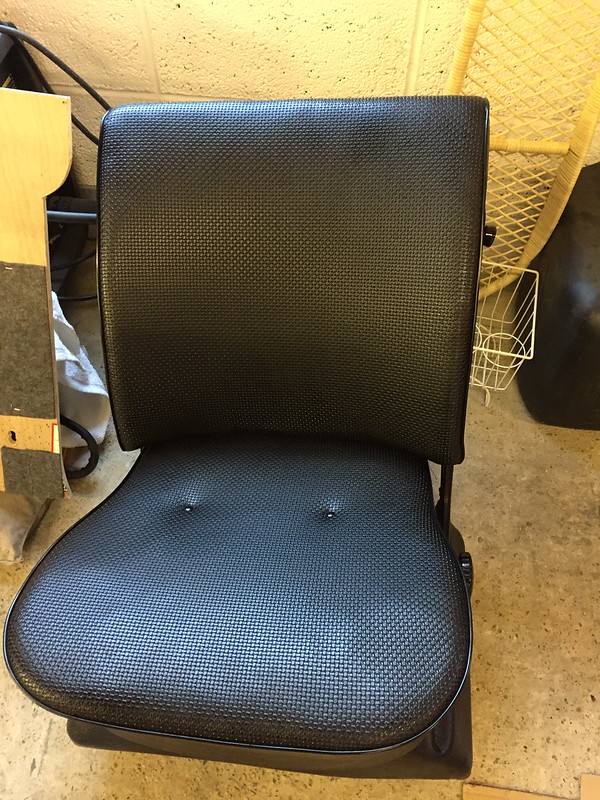 Pretty pleased with the results, really cleans up the interior.